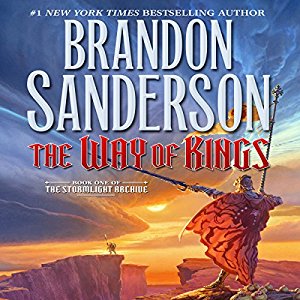 After seven years, I decided it was finally time to move on. That’s how long it’s been since George R.R. Martin released an installment of his flagship fantasy series A Song of Ice and Fire. For me, the final straw was Martin’s recent announcement that he would be releasing not the next book in the series, but rather a prequel detailing the history of Westeros. This felt something like Beyoncé announcing she was releasing an album of brand new polka music.

Wanting to seek solace in another fantasy series, I asked a fantasy-freak friend of mine where I should start looking. Her immediate answer was Brandon Sanderson. “He’s a lot like George R.R. Martin but he actually finishes his books.” Say no more.

So I picked up the The Way of Kings, the first installment in Sanderson’s planned ten-part series The Stormlight Archives. This thousand-pager somehow feels more intimate than A Song of Ice and Fire yet more sprawling in scope. The Way of Kings focuses primarily on just three characters, and over the course of the book we come to deeply understand the personality and motivations of each one. On the massive continent of Roshar, the majority of the action takes place in only two settings: the scholarly city of Kharbranth and the war-torn Shattered Plains. However, the prologue and a series of interludes make clear that The Stormlight Archives will be propelled by characters and events that span many kingdoms and millennia. Closing the book, I was left with a sense that I had been invited to explore a single, intricate square on what will prove a vast quilt of storytelling.

While Martin’s Westeros is a world of woe touched by magic, Sanderson’s Roshar is a world of magic set against a backdrop of creeping dread. The Way of Kings is less graphic and ultimately more hopeful than Martin’s work, but still does a great job of exploring themes of violence and power. But if you read A Song of Ice and Fire for the political intrigue or quick-witted schemers, turn back. Sanderson deals with back-stabbing and political plotting much less effectively (and, thankfully, less extensively) than Martin does. Characters that are purported to be sharp-tongued largely fall flat.

Where Sanderson excels is in his world-building. He manages to knit together a strange land filled with many cultures, religions, technologies, and magical elements in a way that feels completely natural. Roshar feels less like a continent populated with creatures and cultures plucked from existing fantasy mythos, and more like it exists on an alien planet where things evolved just slightly differently. In a surprising and satisfying way, Roshar feels like it makes sense. Sanderson achieves this through meticulous plotting that slowly but surely sheds light on the mechanics of his world.

This attention to detail draws us into a vibrant world, but actually acts as a drag on some of the action. Scenes that should have been kinetic were instead weighted down by Sanderson’s over-explanation. In a world as intricate as the one he’s invited us to, exposition is essential; but, there’s a better place to put it than in the middle of an assassination plot.

Sanderson shines brightest when exploring the action at multiple scales. He follows local events that organically unfold into kingdom-wide consequences. But even more fascinating is his treatment of history, lore, and religion. Sanderson deftly installs a time-hopping device into the narrative that allows us to see how actual events in Roshar’s past have morphed over millennia into campfire stories or dearly held religious tenants. He asks us to consider how a truth can splinter across space and time. This is where it feels like Sanderson is doing something special with the fantasy genre.

If you enjoyed A Song of Ice and Fire for Tyrion’s one-liners, Littlefinger’s schemes, or all the guts and gore, The Stormlight Archives may not fill the vacuum that Martin’s left in your heart. But if you read for the rich world-building and opaque morality, this series might just might do the trick. And who knows, by the time Sanderson releases the tenth installment in the The Stormlight Archives, we might just have our sixth adventure in Westeros.

0 comments on “A Worthy Replacement for Game of Thrones”