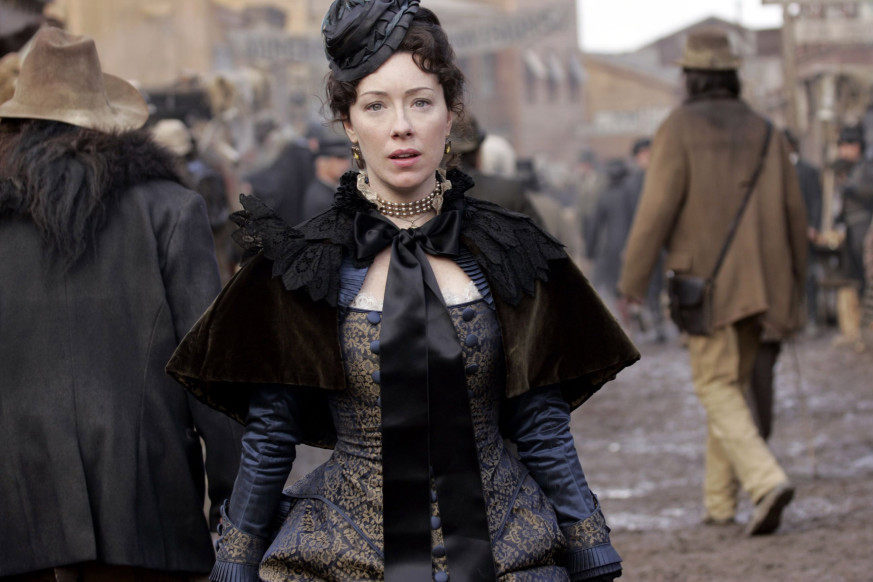 “A Constant Throb” is Deadwood at its best: well written, well paced, well filmed. Not a moment is wasted in this episode, and the fact that W. Earl Brown, who plays right-hand-man Dan Dority, is worth pointing out. (Though Milch writes most episodes, he credits whoever helps him the most with the writing, if I’m not mistaken.) Only the actors of Jack and company feel out of place and perfunctory. Jack Langrishe does little more than attempt to hire a girl who isn’t an actress, tell his trope about it, stifle their complaints, and that’s it. Oh, and one of his actresses refuses Con’s sexual advances, thank god.

Now that’s out of the way, this episode starts on an odd note: Cy Tolliver lays in bed and Doc Cochran, who claims Cy has messed with his own stab wound to the point where it’s opened up again, reprimands him for such action. Cy, according to Doc, has done this on purpose in a form of self-mutilation. For what reason, who knows, though one could argue that Cy feels the need to be cared for and seen about since Joanie has made it absolutely clear that she no longer will have anything to do with him. The last time they made contact, she, Jane, and Mose stood their ground against the evils of Tolliver.

“A Constant Throb” really gets cooking, though, as Hearst watches intensely out of the widow of his hotel’s restaurant as Alma Ellsworth walks to work to the bank. Shots ring out. She’s under attack, though the shooter doesn’t do a very good job. Just after the two have nodded at one another quite amicably, Al jumps from his balcony to help Alma. Charlie Utter also rushes to cover for her. It’s an intense, action-packed scene. Al literally jumping to her rescue does a few things: she’s not only a part of his goal to stop Hearst from complete control of the camp and turning it into a company town but also shows that Alma Ellsworth is a lady he’s grown to respect. (He lets her sit as his desk after whisking her away.) Hearst is obviously behind it, and Al and others parse that he didn’t want her dead, at least not yet. His ultimate goal was to get Mr. Ellsworth, Sheriff Seth Bullock, or both to come to the fore in order to kill them. Once they’re out of the way, the idea is that taking control of Alma’s gold claim would be that much easier. Those two men will assuredly protect Alma. Hearst has taken into account that Al Swearengen and others will also take care of Alma Ellsworth, as later, Barrett reveals to Al — under a severe beating — that Hearst has twenty-five Pinkerton gunmen at the ready with twenty-five more guns coming. It’s a good thing that Bullock was not in camp and instead thirteen miles away in Sturgis for campaign reasons; he would’ve surely drawn his weapon and been shot in the process of avenging Alma’s attack. Instead, though absent for the majority of the episode, Bullock lives another day.

Bullock’s absence makes use of the Deadwood method of removing key characters for an episode as he was away in season one for Jack McCall’s capture and Al Swearengen was laid down in season two. It allows for other characters to get more screen time, and in a cast this great, that’s a welcome move. In this case, Al takes center stage and handles the fallout of the attack on Alma. In an echo of the time period that the series was made, Al emphasizes that Hearst not think that he’s disrupted any of the day’s events with the gun play. Don’t let him think he’s got them in fear is his overall message to the troops, including Alma, as he sends her back to the back after a respite. It’s a tense moment, ramped up by the use of score, as she walks what feels like half a mile to the bank as all eyes are on her: Pinkerton gun men, an armed Dan and Silas, Hearst, and almost all of the rest of camp. Molly Parker, who’s been great since season one, looks both worried and determined.

As for Hearst, he grows more angry, kicking out Hugo Jarry just after letting him know that the elections will bend to his will, much like he expects everything and everyone else to do. Hearst instructs the head Pinkerton, Barrett, to take a note to Al Swearengen. He’s afraid to do so, and it’s expected. Captain Turner ended up dead after he took a note to Al, but that’s because George Hearst made him prolong the fight, which allowed Dan to kill him. Al finds all that out while beating Barrett down in his office. He does take breaks in order to step to his balcony and rub it in Hearst’s nose that this time, he’s in control. He does this, though, without tipping his hand: he asks where Barrett went if he wasn’t already back in Hearst’s company. It’s a witty way of saying “fuck you” to Hearst without the danger of actually doing so.

Dan has roped up Ellsworth so he doesn’t immediately attack Hearst and end up dead. Al has Bullock telegraphed without mentioning the particulars of the morning. And Al brutally slits Barrett’s throat after milking him for all his information in the next step for a war with Hearst.

With Seth Bullock fuming at home to the point of silence, the next move is all Hearst’s as Al takes another of his men out of the picture and more guns are soon to arrive. And though George Hearst is as much about mind games in this episode as anything else, the price of these actions are likely to result in blood.

Al, who might as well be commenting on the theme of the entire series, says to Jewel who wants to take food to Alma Ellsworth: “Every step a fucking adventure.”