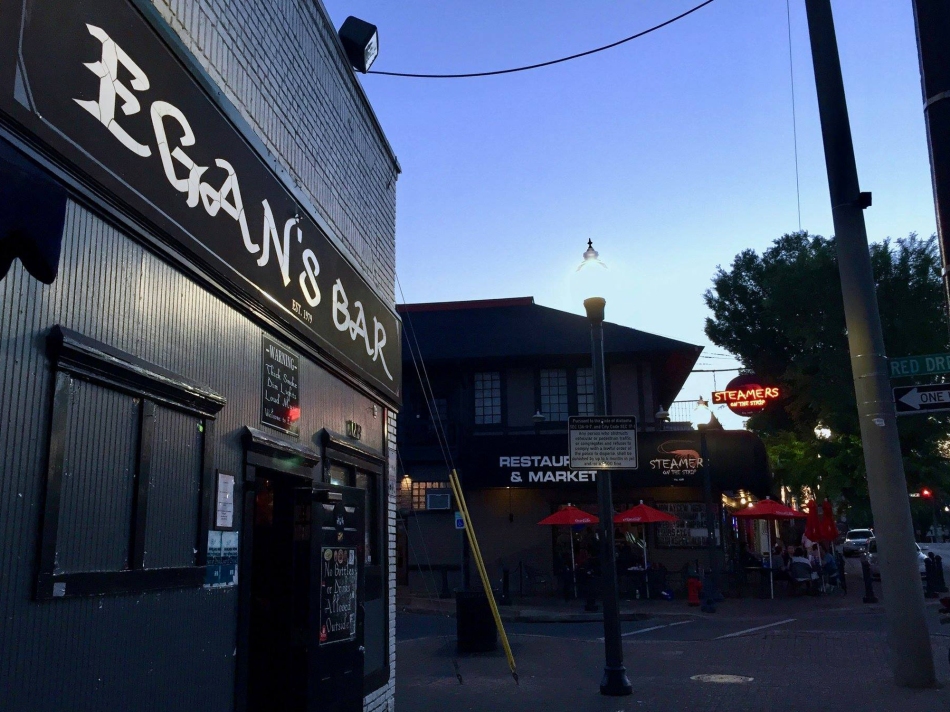 Subscribe through iTunes, follow the show on PodBean, or visit our website where you can find this podcast along with our other, considerably more disturbing one.

Once word started circulating that Egan’s bar in Tuscaloosa had been sold, the rumor mill kicked in full-force.  The fate of the beloved dive on the corner of Red Drew and University Blvd. was a hot topic among the locals and some new rumor about the bar’s demise cropped up each day.  What would become of the bar’s green plywood walls covered with framed pictures of regulars, its Christmas lights, the Jägermeister machine, the “church pew”?  Will the building become a Starbucks?  Another Chipotle a few doors down from an already existent one? How long until the building is flipped and sold to the university?  Some of the speculation masquerading as truth seemed plausible but most of it was just absurd.

After about a week, the reality of the situation made its way through the Egan’s grapevine; the long-time owner, Bob Weatherly, had sold the building that houses Egan’s to a local property management company but the bar business itself was being acquired by a local investor who supposedly had a soft spot for Egan’s.  For a time, it seemed as if Tuscaloosa would get at least a few more years out of this small, worn-out hovel.  While we were editing the first episode of Thick Smoke and Loud Music though, this deal for the sale of the business of Egan’s fell through.  Now, we’re back to fearing what the future holds for this last holdout of original live music and inclusivity.

During the week prior to the closing of Egan’s, we set up a table and several microphones in the back corner of the bar hoping that people would open up to us and tell us a few of their favorite Egan’s stories.  Any fears that people would take one look at the waiver we produced and walk away were unfounded.  We were almost immediately recording tales of illicit drug use, public sex, break-ups, make-ups, and all manner of tomfoolery.  What began as a pet project for our friends turned into 42 interviews and enough material for at least three episodes worth of stories from longtime regulars and from relative newcomers who were just starting to frequent the bar.

The first night of interviews was, for the most part, just unemotional fun but, toward the end of the evening, something changed.  One particular interview began like most of the others, with a regular struggling to recount something so outlandish that it might be wilder than the tales told by his friends.  But when asked where he intended to spend his evenings while Egan’s was closed, his expression sank and this middle-aged metal-head with a deep tan from outdoor labor in the Alabama sun got misty-eyed on us.  He fumbled to find the words to express a perfectly honest concern about the dispersion of this eclectic group of people that he considered to be his family.

It was then that the weight of what was happening became apparent.  For Eganites, this is family.  Full stop.  This is a second home.  This is screaming at football games, drunken political arguments, and chili cook-offs.  This is literally losing your shirt on a roll of the dice.  This is booking your shitty college band’s first show.  This is the smell of cigarettes and bleach and cinnamon-flavored whisky.  This is meeting your future spouse in a haze of smoke and badly-strung Christmas lights.

These are the stories of the last days of Egan’s as we know it.

All of the music in Episode 1 was original and provided to us by artists that have actually had the experience of having people walk through their bands, mid-gig, to get to the pisser.  The tunes you heard in this episode were by the following:

Armless Victory – Check out their SoundCloud page.  If you’re into electronic music and danceable ambience, give it a listen.

Baak Gwai – A long time Tuscaloosa favorite for damned good reason, grab their first album here, and then gander at their Facebook page.

Bible Study – Their Facebook is here, and if you’re looking for a great folk rock album buy this one.

The Haunted Stepdaughters – Were a band that existed.  Here’s a YouTube video that proves it.

Mansfield – Fronted by an honest to God Egan’s bartender, listen to “Ode to Jack” on SoundCloud.

The Penetrators – We were so fucking pumped when the Penetrators told us that we could use some of their music.  A physical CD will set you back, but you can scroll down and buy the MP3s at the usual price.

Universe Music Band – Psychedelic hillbilly music from way back.  There is jack shit about this band online.  It’s a damned shame because “Jasper the Ass Pirate” is a good song.  Here’s their MySpace page.  Good luck getting the songs to play.