If I had my way in the world, I would unabashedly slap a copy of Factfulness: Ten Reasons Why We’re Wrong About the World – and Why Things Are Better Than You Think across the desk of every business executive, public employee, or Twitter-ranting high-schooler in the world, and with good reason. Hans Rosling, along with his son and daughter-in-law, has managed to create a piece that not only encourages practical thinking and factual accuracy, but that gives a startling update on a variety of global conditions. His argument is so convincing that it would take immense stubbornness to make an attempt at refutation on points, as Rosling isn’t afraid to back up every statement he makes with hard evidence (just look at the 25-page collection of sources at the end). As it turns out, the world really isn’t as bad as we think, but it’s not going to get any better unless we continue to adapt. If it seems like I’m placing a lot of weight on the value of this novel, well, it’s because I am.

This book will make you aware of your vast ignorance on global issues while still contriving you towards an insatiable lust for knowledge in the first chapter. It does so by encouraging you to take a brief test – one that contains questions upon world health, education, and climate change – which would appear as familiar topics to any educated reader. Upon seeing the results, I was horribly embarrassed by my own performance and appalled when I saw how some of the world’s “leading experts” scored. Such is the beauty of Factfulness; it subtly guides the reader towards realizing that the world is a much different place than they may have originally thought (thankfully, it’s for the better). Many regions that you might mistake as a desolate wasteland are rapidly developing into serious economic competitors, and their education rates aren’t that indigent either; however, this method of thinking isn’t just restricted to global issues: learning to focus our energy upon subjects that need our attention is more efficient than wasting it upon those that don’t. While Rosling tends to write upon world healthcare in this novel, the lessons he conveys would be perfect for any field imaginable.

Factfulness makes it clear that one’s perception of the world and daily events should be constantly redefined with the introduction of new data, which we should be ever-searching for. This is something that’s relatively difficult, as it’s much easier to assume that once we learn something, it is constant and absolute. While this might be mostly truthful in a subject like physics, it would be horrendous to do so in a social science, as cultures, social formalities, and dogmas vary by region and age. If one begins to discuss altering this perception, people tend to become offended pretty quickly – reevaluating a belief system or restructuring one’s thought patterns is not comfortable, and often, it will contradictory to previous beliefs. Our worldview begins its formation from the very minute we are born; we gain what we know about our environment from parents, grandparents, teachers, friends, news outlets, and many other sources, all of whom have some form of agenda. This isn’t wrong, but it would be foolish to let every thought process become dictated by an external, biased opinion (some are probably completely comfortable with that idea, but it absolutely terrifies me). Shifting our thoughts from being influenced by facts rather than stereotypes, experience, or preconceived notions is absolutely radical, and it contradicts almost every aspect of the human experience; this is why Rosling centers Factfulness around understanding the weaknesses that we naturally have as humans, and how we can learn to defeat them. 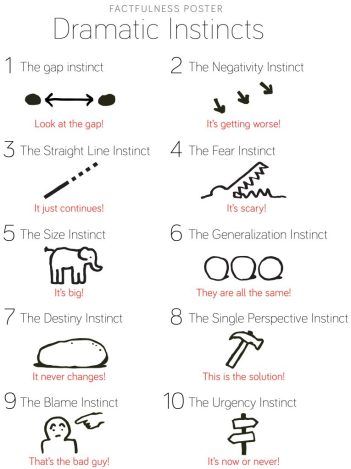 To the right is an illustration that highlights some of these tendencies that prevent us from being able to make effective decisions in any scenario. Rosling devotes a chapter to each of these instincts, working to eliminate them from your psyche by bombarding you with mountains of irrefutable data. However, don’t get the idea that the author is being overly pedantic. Rosling has decades of experience working in impoverished nations, where he’s gained firsthand knowledge of problems that have been largely solved, and how to answer the ones that still persist. This book is unique. It will transform the way you view any element of public policy, while helping you to become a more effective thinker as a whole.

In an age where the current Presidential Administration seems to place importance upon Dionysian theatrics rather than facts, Rosling’s message of thoughtful action and data-based optimism is a breath of clear air. Fortunately, I’m not the only one raving about this book. Bill Gates, on his blog GatesNotes, is offering a free download to any recent college graduate. Hopefully, this book will resonate with its readers, and we’ll see Rosling’s legacy at work in the near future.

“The world would be better if literally millions of people read the book. I give it my highest recommendation.” — Bill Gates

0 comments on “‘Factfulness’, Or How I Learned to Stop Worrying and Love the World”