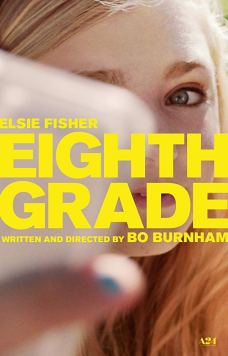 If it only could be measured, exactly how much of people’s need to fit in (or fear of not being a part of a group) controls our actions? Eighth Grade, an excellent new film from writer and director Bo Burnham, posits that drive, that need is the most demanding presence in any middle schooler’s life. It could be that it doesn’t ever fully go away.

Eighth Grade is singularly focused on Kayla, who’s beautifully played by Elsie Fisher (watch her posture for the most accurate of all junior high scenes), an eight-grade girl trying to get through her lonely last week of junior high. Kayla’s a bit of an extreme of what we all have felt at one time or many more: shy, quiet, friendless. She compensates by making motivational YouTube videos, which all but go unseen in the void of the Internet. It’s an apt metaphor for the life, worries, needs, and fears of a middle school kid. While we’ve all been there, as adults those anxieties seem lesser than when compared to any “real world” dilemma. Burnham, however, doesn’t overstate these common issues as much as he shows them in such a naturalistic way that viewers will remember the weight of such desires, often unfulfilled. It’s jolting how quiet the movie can sometimes be in those scenes of disregard.

Part of the compact, lived-in emotion of the film is Kayla’s single dad. Played with perfect notes by Josh Hamilton, Kayla’s dad is not cartoonish or overblown. There’s a certain sadness to him that gets to you, especially as Kayla has the usual teenage angst in many of her reactions to him and his requests for more feedback from his daughter, who’s so stuck in Instagram she barely eats her dinner.

The movie has long stretches of horror: each of Kayla’s days, especially in school or party settings, is so cringe-inducing that viewers will carry a feeling of something horrible lurking around the corner. One scene in particular plays out with such hushed, pitiful apologies at its end rather than the expected screams. No spoilers here, though.

Overall, Eighth Grade is a touching film that holds a mirror to our social media age without ever getting preachy, and for that, it’s worth the time away from the cell phone.

0 comments on “Eighth Grade is a Movie For Everyone”