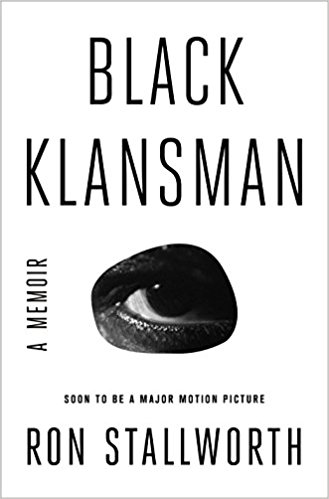 Wow, does Ron Stallworth have a story. Lucky for readers, he divulges exactly how it all came to be in Black Klansman: Race, Hate, and the Undercover Investigation of a Lifetime.

As the first African-American detective in the history of the Colorado Springs Police Department, Stallworth randomly answers a newspaper ad to join the Klu Klux Klan. He quickly finds himself in year-long undercover investigation where he not only becomes a Klansman but also meets David Duke, infamous open leader of the Klan for many years, and becomes Duke’s bodyguard for a day. Nope. This isn’t fiction.

How he manages such feats I’ll leave to the author himself. It’s a plain piece of writing that documents in fairly linear fashion his infiltration of the notorious hate group (and almost finds himself in another anti-government, survivalist organization that sounds a lot like Cliven Bundy’s bunch of assholes). Stallworth doesn’t bother for pizzaz or rhetorical flashes. Due to that, the narrative does lose some heft and suspense it should naturally contain. The author also has a tendency for unnecessary repetition. But despite these issues, the story alone is worth the short time it takes to consume it.

The most damning of Stallworth’s account are how much of the Klan’s ideas from their secretive ceremonies mirror the open rhetoric of Trump and his ardent supporters; what’s the most frightening is how unsurprising the two group’s beliefs are. It seems the only real change from Stallworth’s 1970s to Trump’s 2018 is that the racism is much less private. I’m not sure I’d call that an improvement.

“Do you believe in Racial Separation?” one ceremony question asks of Stallworth and his stand-in. “Do you believe in the right for our own people to practice the Christian Faith anywhere they assemble, including prayers in schools and public facilities?” asks another section. It’s like I’m looking at the local newspaper.

It’s sad that Black Klansman is just as timely as it was when it was unfolding in the late 1970s.

One would think we would’ve come a long way since then.

0 comments on “Book Review: Black Klansman: Race, Hate, and the Undercover Investigation of a Lifetime”