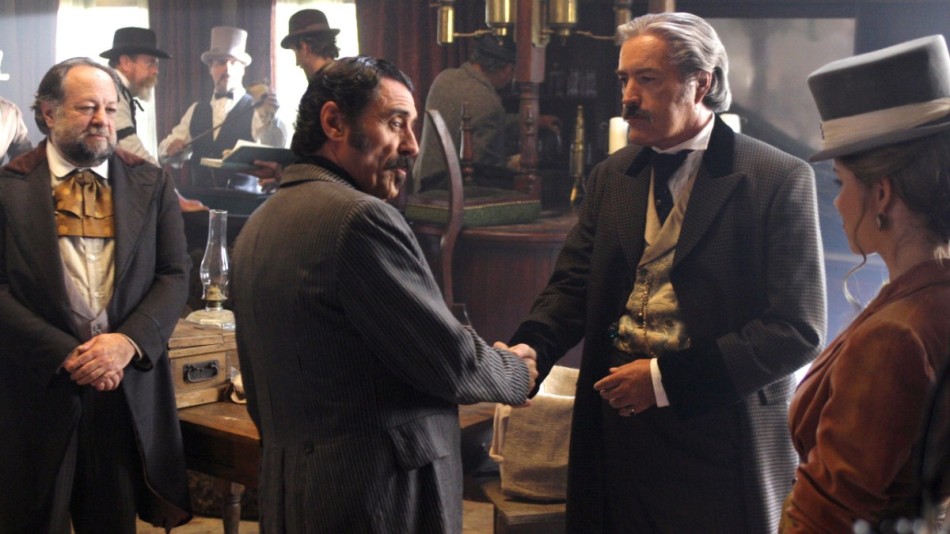 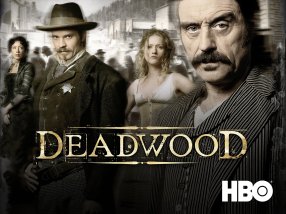 Before going into the episode, let’s have a look at Jack McCall’s aging challenge from his first and last photo on Facebook.

Well, time has been kind to the man. Wild Bill, on the other hand, maybe not so much.

“Reconnoitering the Rim” is all about invasion and who to trust when such intrusions start to pile up, one or top of the other. How does that affect the control — or illusion of control — that you have?

With the new Bella Union Saloon arriving in town from Chicago — all done in secret, no less — Al (who’s been to Chicago) finds himself with more than just the hardware boys to deal with now that the murderers of the “squarehead” family have been disposed.

He tries to make nice in order to set boundaries, in order for the intrusion to have its limits; but Al finds that the Bella Union Saloon is higher class and perhaps due to that is unwilling to discuss any overlaps. The new joint, led by a steely-eyed Cy Tolliver (the late, great Powers Booth), Joanie Stubbs (the always wonderful Kim Dickens), and gambling overseer Eddie Sawyer (another recently deceased and excellent performer, Ricky Jay; I encourage you to seek his expertise beyond this show), has a faro dealer that is as dope-addled as any of Al’s cronies. Al thinks if he has to deal with interlopers, he can at least keep an eye on them by buying off one of their employees. What Al doesn’t realize is that Cy Tolliver is no pushover: Cy already has spies in the camp, beginning with the broker of his saloon’s building, which is none other than E.B. Farnum. It will later cause Al to decipher on who to believe in such trying, fast paced times.

Because of this new saloon or maybe in spite of it, Al decides that selling his rented lot to the hardware business of Seth Bullock and Sol Star is now a good idea, as long as they agree to no whores or whisky. Both are fine with the limitations. They give him $1000 and that deal is done. Al knows that he has to put some of the shit behind him if he plans to move forward; it would be disastrous to him to try to keep tabs on this many things, especially when he has yet to uncover who went behind his back to bring in new competition.

Elsewhere, Hickok continues to play poker with the ever annoying Jack McCall, who insists on bickering with Wild Bill. “Well, that’s one in a row, Wild Bill!” he shouts as Bill manages to keep his two legendary guns that he uses to call a bet. Just because it’s the Wild West, Bill isn’t without celebrity. He’s hounded by one person or another, most of whom want to get the best of him, often in deadly fashion, for their own bragging rights. It’s no wonder he’s prone to gamble and to drink despite having a wife in Cheyenne whom he wishes to provide for. Bill’s late-night poker playing even keeps him from helping the reserved Seth Bullock, whom Bill admires for such traits, and the affable Sol Star from getting their building finished. Bill’s story is tragic. These infringements on his privacy, while unlike Al’s invasions of business, still hinder him from living the way that he wants to live.

The last incursion comes from Brom Garrett. He feels his claim isn’t worth shit, so he takes this to Al, whom he knows had a big hand in the transaction. After a serious threat of the Pinkerton Agency, Al changes his tune, gets friendlier with the dude, and suggests that he reconnoiter the rim with Dan, something the Pinkertons would do upon first arrival. The last invasion Al wants is the Pinkertons. The look of shock he that briefly passes on his face is one of grave consequences for those whom he feels transgresses. He tells Dan to “make it look like an accident.” Not only does Dan kill Brom, leaving his widow in E.B. Farnum’s hotel alone, but he finds that the Garretts were actually sitting on one hell of a gold strike.

Al Swearengen, to a group gathered in his office: “I’ll tell you this for openers: we are gonna set off an area on the balcony, and God help whoever doesn’t use it because the next stink I have to smell in this office, and whoever doesn’t admit to it, is going out the window into the muck on their fuckin’ heads and we’ll see how they like fartin’ from that position, okay?”