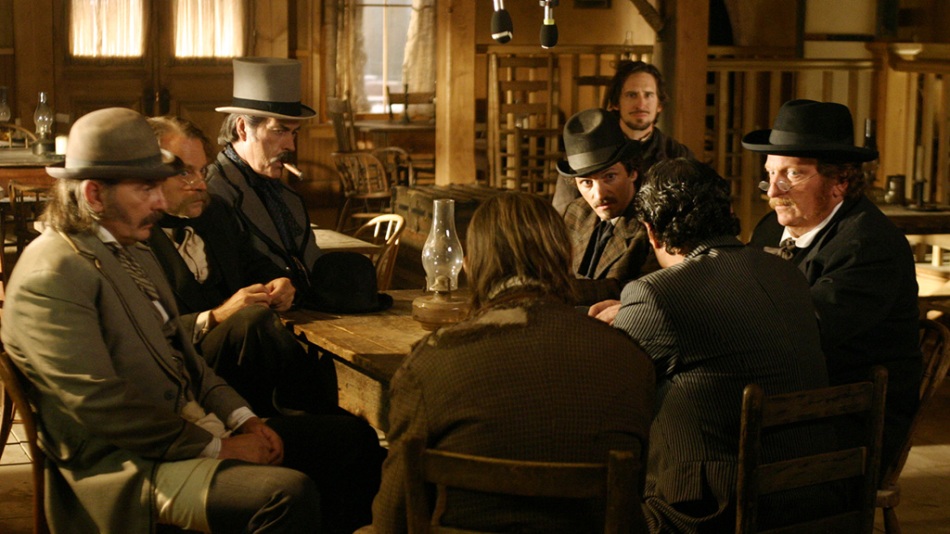 “Plague” opens with Bullock tracking Jack McCall, but he’s soon hit by a Native American who nearly bests him with a swipe to his head. It’s evident more so here than elsewhere in the series thus far that Seth Bullock is a man unhinged with anger — anger from the death of his friend, but also, seemingly, a deeper resentment — by the way that he brutally murders his attacker. It’s key to note that he’s not without scruples, though: after Charlie Utter stumbles upon a beaten Bullock and gets him upright, Seth insists on burying the native in some fashion. From there, they pair up to continue to find Jack McCall.

Back in Deadwood, fears mount as the camp businessmen realize that there’s a significant small pox outbreak that’s only getting worse. Cy Tolliver’s rider returns to camp not with the proper medicine but with the countenance of a sick, dying man. Things look bleak. Once Al Swearengen determines that the outbreak likely started at the Bella Union, he confronts Cy.

Deadwood dismantles even more Western tropes in this scene. There isn’t one clear protagonist in a white hat facing down a classic antagonist, adorned in black, and both in the street at noon. Both Al and Cy have been presented as men who behave badly, both in unfavorable lights, but Cy gets the upper hand on being the worse of the two in this episode as he barely veils his threats of abuse to Joanie and lets Al know that he does not allow anyone to talk to him in tones other than respectful.

One of the best scenes of the series to this point occurs at the gathering of the camp’s notables. Here, Al recommends that they get the vaccine by sending out three sets of men for the job and he fronts some of the payment; he also takes pride in helping construct the newspaper piece that offers a hopeful warning. It’s also here that Reverend Smith suffers another seizure, though he’s cleared by the doctor to help with the sick. Seeing all these characters in one room is energizing.

Doc Cochran recruits a grieving Jane for help with the medical tent when he finds out that she’s been exposed to Andy yet shows no signs of illness. Robin Weigert is perfect as a mournful friend who has never quite figured out how to be sad in such a rough and dangerous world for women. Her dialogue in “Plague” are as good as they get; to have anyone else deliver them is unfathomable.

The last subplot has the nosy E.B. Farnum — nosy for the sake of his own skin, it should be told, as he is the “billiard ball” and Al is “the cue” — once again repeatedly interrupting Alma Garrett, who is in the throes of withdrawals. Trixie convinces Alma to pretend to be doped for the sake of duping Al, creating a hilarious scene between E.B. and Alma. Both William Sanderson with is confused looks and Molly Parker with hidden pains make for comedy in a series moment.

While the Bullock plot line feels out of place and too distant from the goings on of Deadwood, the episode is still another well-written offering where we see the camp start to develop into more of a village with clear leaders and the important decisions being made by them.

E.B. Farnum as he watches Jane go to visit a sick Alma: “Her gutter mouth and the widow in an opium stupor. A conversation for the ages.”