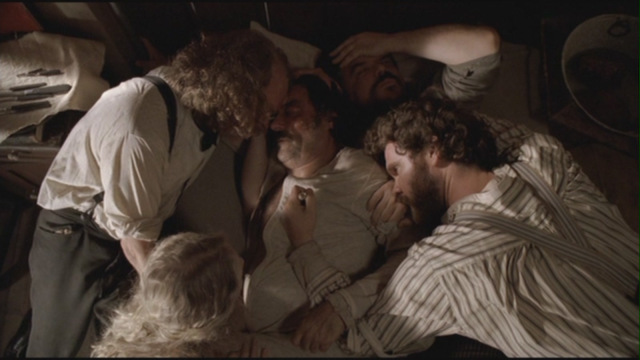 gleet (noun) Medicine — a watery discharge from the urethra caused by gonorrheal infection.

“Requiem for a Gleet” starts with as stiff (forgive the pun) and awkward advances for a sexual encounter between Seth and Martha Bullock, where they use “discussion” as a euphemism, while over at the Gem Saloon, Al looks like a dying man. Ian McShane puts everything in his performance in this episode — howling in pain, appearing near death, telling everything we need to know just through his eyes. The procedures that Doc have in mind not only sound as painful as one could imagine but also could kill Al.

Over at Alma Garret’s mining operation, Ellsworth recognizes Frances Wolcott and immediately knows the trouble behind Wolcott’s presence at the site. The writers amaze by allowing some exposition and character development all through a few choice lines and glances: Ellsworth was unsurprisingly a hero at the Comstock Lode where he dug for days without resting to rescue miners who were trapped by Hearst’s greed and haste to mine silver. He wasn’t able to save them all, though, as forty-six died in a hole that should not have been dug, according to Ellsworth. Ellsworth is the only character thus far that hasn’t trembled from the notion of Hearst and his minion looming over Deadwood to suck the camp dry of its gold.

In E.B. Farnum’s hotel, Alma sits with Miss Isringhausen once more and this time, in a much calmer demeanor than she displayed in their previous encounter. Alma is still of the mind to dismiss Miss Isringhausen, but with a very generous amount of severance and other money for her troubles and travels to Deadwood (though she does take one more chance to condemn Isringhausen with a sly comparison to Cotton Mather.) It’s only later that the full scope of Miss Isringhausen is laid bare when she gently accosts Silas Adams in his hotel room and reveals that Alma plans to have her killed after have killed Brom Garret, both of which are lies. Miss Isringhausen doesn’t have any notions of exiting Deadwood just yet and she’s under the idea that she can play Silas Adams.

Cy Tolliver furthers his developments, which are now more clear. Not only is he buying up gold claims either to sell to George Hearst or to give to him for a number of other reasons but also Tolliver is now working with a new “San Francisco cocksucker,” per Mr. Wu, who will be providing opium and Asian prostitutes in an effort to push Wu out of the entire Deadwood scene. It’s all a part of being a bigger man in town than Al Swearengen and making more money.

Swearengen, though, is taking no visitors and advancing no monetary gains, even though the possibility arrives through Eamon, a.k.a “Crop Ear.” In another nice bit of dialogue that covers exposition, Crop Ear looks to be a ghost of Dan’s past that Dan would rather not relive now that he’s moved on as manager of the Gem. But Crop Ear is there to offer up a score for Al to be privy to. If season one does anything, it establishes that Al has to know about robberies and the like so that he gets his piece of the action. It’s understood that Al will take care of any strings that are left hanging as long as he’s paid his part. However, Dan doesn’t have the patience or the wits of Swearengen, plus Crop Ear seems to begrudge Dan for his standings in the camp. Before long, Dan’s dealings with Crop Ear go sideways. R.I.P. Crop Ear. Dan does him in at the top of the stairs of the Gem and lets him bleed out from the throat there.

E.B. Farnum condescends to Alma Garret about the rumors of the gold claims and those claims’ validity, especially timely as the slimy commissioner named Hugo Jarry arrives in town and seems willing to make Hearst’s rumors become partly factual. In a great cat-and-mouse conversation, though, Alma turns her feigned ignorance around on E.B. by emasculating him, putting him beyond his depth, and even forcing his hand at selling his hotel to her.

As night falls, Walocott begins to show the range of his danger and awfulness: he is practically holding the ladies of Le Chez Ami hostage by having them face the wall. In his recounting of myths, he wishes to show those ladies that he is the god to them. HIs tale involves the women being rewarded for serving the men by the lands becoming fertile. Walcott’s an evil character, as is shown, because he’s masking fear and deficiencies that are sexual in nature: he won’t have actual sex with the girl he’s requested and he is entire too quick to finish in the act altogether. In order to cover up for his appeared lack of manliness, he attacks women and uses his power to control men.

Finally, there may not be a more painful scene in television than with Al attempting to evacuate his kidney stones, which are stuck in his bladder. Credit to all actors in the scene, who lie on the bed with the Al in a huddle that mirrors some ancient painting. The final shot of the episode is of Al, taking one sigh of a breath at having lived another day.

Frances Wollcott in an attempt to strike fear and power over Ellsworth: “Just as a man opposed to inevitable change needn’t invariably be called a luddite, another choice might be simply to describe him as slow in his processes.”

0 comments on “Second Take: Deadwood – Requiem for a Gleet”