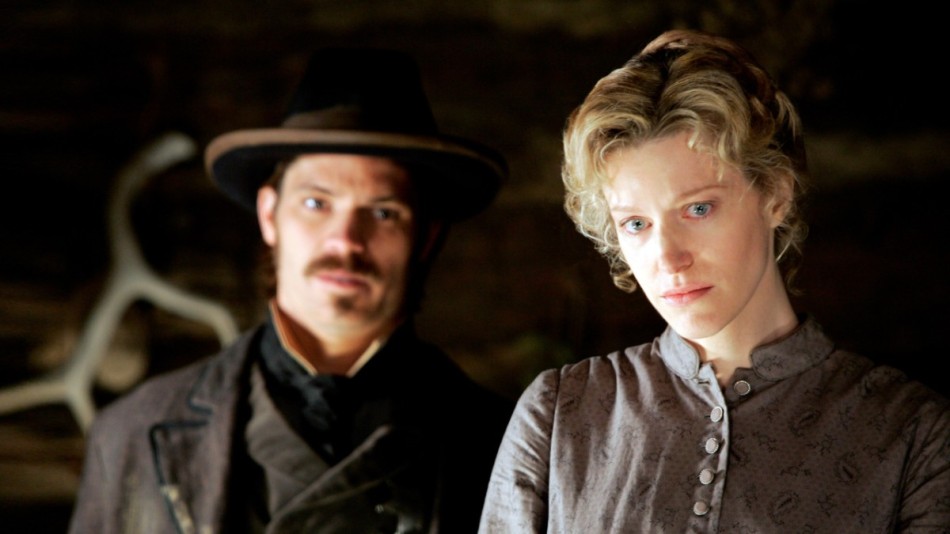 Before getting into episode ten of the second season, feast your eyes just below to see that HBO dropped the first teaser trailer for the movie that will release on May 31st.

When Al tells Trixie that the day saw “advances, none miraculous,” he could’ve well been talking about the movement — both figuratively and literally — of the people of the camp in Deadwood. There are numerous shots of people walking to and from places, making journeys, and perhaps because of that, the camera moves with them more so than any other episode of Deadwood to help signify the advances made, big and small. It’s a subtle and nice touch from director Daniel Minahan. And paired with movements are the damages that come with them.

For the second time this season, the people come together, whether physically entering one another’s realm again or spiritually. The first instance of congregation was Nuttall’s new bicycle and his conquest of the muddy thoroughfare. This time, it’s the complete opposite in tone as the camp laments the mortal injuries to Sheriff Seth Bullock and Martha’s son. Almost all of the actions and dialogue either revolve around the accident or come around to young William.

Hosteler and Fields realize exactly their part as soon as they see that there was a major problem in the camp and they set out to run. While camping, Hosteler makes a decision to try to make amends on the issue by capturing the wild horse that trampled William, bring it back to camp, and apologize for something he had no intention of doing before he leaves Deadwood for good. As an African-American in 1877, he knows the risk of attempting the plan, but he knows his conscious needs relief.

Alice Isringhausen’s papers have yet to be signed, though, and she sits in Al Swearengen’s office in refusal. She can’t trust Al, and who’s to blame her? Before he can move forward and get her out of his presence for good, he needs Silas Adams to determine some issues with her. Al also sends for Sol Star (which creates a big trip for Dan, who has to put up with everyone’s attitudes and questions in the process). Not only that, but it’s around this time that Al discovers that Commissioner Hugo Jarry is soon to arrive in camp once again, likely to uncover more about the rumors of Montana’s interest in Deadwood. There is a lot of gold in Deadwood, and whichever state lays hands to the camp, that’s even more tax money — not to mention bribes.

When Commissioner Jarry arrives, he immediately hits up Cy Tolliver at the Bella Union where Cy warns Jarry not to approach Bullock over these rumors as he and his wife are keeping vigil with their son. What that creates is a vacuum of information, which Al intelligently fills by having Sol Star give Silas Adams the ins and outs of a few of Montana’s officials in order to convince Jarry that Adams met with one of them to ensnare Deadwood in Montana’s grasp. Jarry buys it, and leaves for Yankton to let everyone there know that Deadwood is still up for grabs but the price may have just risen. Al, informing Adams of their possible success, feels as though it is a promise of elections and not just money: Deadwood will be officially on the map, so to speak.

After having been taken to Joanie’s per Cy’s demands, Mose Manuel lays on the floor with a bullet near his heart. At first declining, Doc Cochran decides to try an operation to save him.

The soul of the episode lies, of course, in the pained eyes of actors Timothy Olyphant and Anna Gunn. No matter how much movement and improvement flutters throughout the camp, their lachrymose expressions show that their lives are altered like no other’s; the trauma will have much more long-lasting effects than any of the camp’s advancements. Martha blames herself for bringing William from Michigan. Seth tries to help by talking to William as he lies dying. It’s a pitiful, heart-wrenching scene.

And while Al may have secured himself nearer to Hearst and his money, what cost will his movements make? What injuries await with this progress?

Wolcott, commenting on Commissioner Jarry: “I am a sinner who does not expect forgiveness, but I am not a government official.”