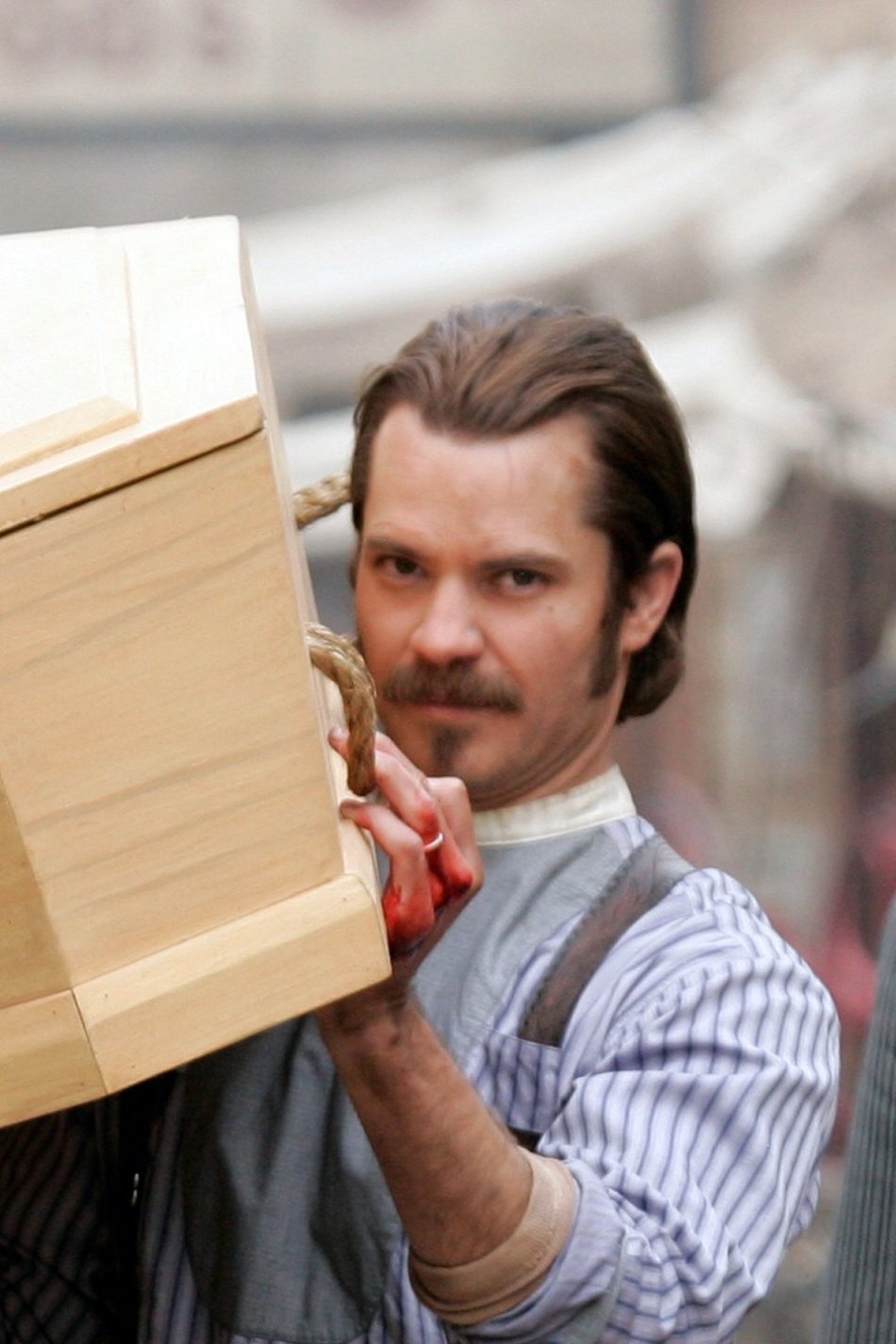 What the penultimate episode of Deadwood‘s second season examines is the awfulness that death uncovers in people, perhaps because of the knowledge that the world spins, money is to be made, and deals are to be brokered no matter who lives or dies.

This is first demonstrated in the opening scene where Al Swearengen, walking to talk to the grieving Seth Bullock, smells the burning bodies of the dead Asian prostitutes whose dead bodies are being tossed into a fire without care or ceremony to be forgotten. It’s no wonder that it upsets Mr. Wu despite not knowing them and in spite of their caretaker being Lee. It’s an upsetting sight. And then Al has to interrupt Seth constructing his son’s coffin to let him know that Commissioner Jarry could very well approach Bullock, no matter of his son’s funeral, to ask of the accuracy of the rumors about Montana’s involvement with the camp in wanting to make Deadwood a part of that land.

Shortly after, Al has to let Mr. Wu know in unpleasant terms that he doesn’t care for the dead Asian prostitutes, though that has a lot more to do with the fact that he’s weighing his options: does he openly go against Hearst’s Asian arm of Mr. Lee and disregard his business partner Mr. Wu?  Even though Lee is an emotionless, evil entity, Al seems to recognize the possibilities that it all holds: getting Hearst to see Al as weak, perhaps, in order to use Mr. Wu’s set of Asians at a cheaper price in the mines. It will all build in Al’s mind to Hearst viewing Al as no big deal and avoiding any tangle with Hearst when it comes to Deadwood elections; elections that are likely on the horizon.

And how soon are elections to come? It’s part of what Al wants when he declines the fifty-thousand dollars that Jarry brings to him. Al wants the bribe not to be monetary but consisting of said elections, of being official. Yankton — via Commissoner Jarry — does not want lose the money from bribes they would get from Deadwood and they definitely do not want to disregard the loads of gold taxes. Losing Deadwood to Montana would come at too high a cost. So it is with that discussion that Jarry readies to let those in Yankton know to take in the camp as an official part of the territory all of which is just in time for George Hearst’s arrival.

While the mention of Hearst’s presence seems all but guarantees his appearance in the final episode of the season, it could create the image that the entirety of the second season was little more than a set up to the third; but with Hearst in the shadows, the show does well to build unease and dread. The coming of the strongly armed capitalist will suck up like a vacuum those who have worked hard and toiled for their gold. Hearst will have some men, be they German or Asian or whoever is cheapest, rake it in for him. It’s also George Hearst’s imminent coming that prompts Cy Tolliver once again to reference the cliff to Wolcott — that cliff that causes Wolcott to be abusive and murderous to ladies of the night — as a defense to Wolcott’s threat that Tolliver is no longer useful. Exactly who gets thrown off what precipice is yet to be seen. For now, it’s Chekhov’s cliff.

Though things seem to be going Al’s way, his mood sours more and more as the day turns to afternoon, evening, and night. It’s all due to the funeral of William Bullock. It reminds him of two harrowing moments, possibly three: the abuse that he took after his brother — which is likely the brother that he referenced in season one as the brother with the malady of seizures, as Al says he was “flopping like a fish” — died (Al mentioned him shortly after Al euthanized Reverend Smith in season one). The brother is a part of a family that took in young Al as an orphan, long after his mother had left him behind for Georgia. While it wasn’t his real brother, he definitely felt an affinity for him and it shows through his gritted but tortured speech to poor Dolly. The second haunting moment is the ripple effect of that death on young Al Swearengen. The third is the continued reminder that he was truly unloved by a mother who left him behind.

It closes with Seth taking a firm commitment to Martha after a tumultuous, at least emotionally, funeral. He is there for her, no matter his past grievances, and she accepts. Though death and loss display the ugliness of the people of the world, for Bullock, he wants it to be his moment of change.

Al to Commissioner Jarry when he questions Al’s grief over William Bullock’s death and sounding more Shakespearean than ever: “What a type you must consort with, that you not fear beating for such an insult.”

0 comments on “Second Take: Deadwood – The Whores Can Come”