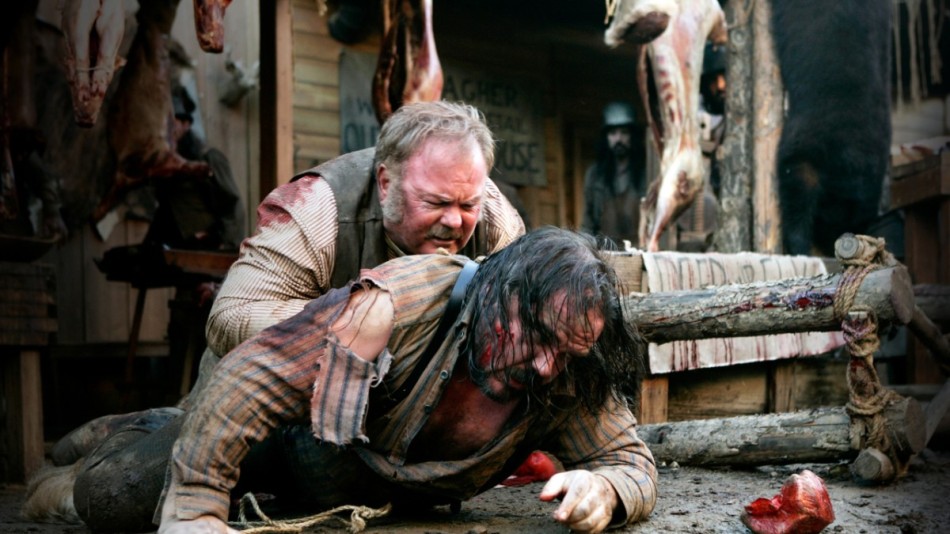 As the title of “A Two-Headed Beast” implies, Deadwood‘s fifth episode of its final season creates and examines pairings, some of which are unnatural, violent, and deadly. It also calls to mind Shakespeare’s quote in Othello of a “beast with two backs,” and for good reason. There are a few characters getting fucked.

Other than a quick and silly aside with Cy Tolliver dismissing Con Stapleton as a proxy in dealings with Hearst, the episode begins in earnest with Silas Adams sitting with George Hearst. Captain Turner, full of bluster, looms in the background and the gist of the meeting is both to measure Adams and to send the message to Dan Dority that the Capetian is itching for a fight as much as Dan. Dan and Turner’s fight is one of the pairings of the episode and the most bloody. There’s something to be said on how Dan is nearly beaten and only makes it out of the fight by literally plucking out the captain’s eye in a moment of desperation. It’s as gruesome as the show has been up to this point and hard to watch when you know what’s coming. Dan then proceeds to bash away at Captain Turner in the head with a log until dead. It’s likely that having to go to extreme measures in order to live shakes Dan along with what Al Swearengen notes to Johnny: Dan’s bothered by seeing death so close in a fair-enough fight. It’s yet to be seen if the battle between the two men works as a metaphor. A large, lumbering, powerful entity strides into camp, beats the native ’till near death, yet the indigenous manage to survive in a last-ditch, horrible, bloody effort.

The next odd couple is already entwined via marriage: Alma and Ellsworth. A sad affair to be sure is the realization that Alma is back on the laudanum, likely due to her traumatic experience with George Hearst though it’s also to gain confidence and attraction to her new husband. Poor Ellsworth, shocked to the bone, volunteers to leave the house entirely when it comes to him her condition. The scene between the two is played note perfectly by Jim Beaver, full of anxiety and worry and then disgust about advances from a woman he’s always thought that he didn’t deserve. And the medicine does make Alma at least appear lusty as A.W. Merrick finds out in his off-kilter conversation with her about the bank’s opening for the newspaper. After the interview, Alma relaxes and even moans. Trixie, though, recognizes it for what it’s worth immediately and somewhat confides in Sol Star about Alma’s precarious situation. And in case it wasn’t clear, Leon admits to Cy Tolliver that’s what he’s been doing by lingering outside the Ellsworth house at strange hours. That’s a revelation that Cy’s surely to use to his favor.

The ending of another duo occurs when Steve gets the livery from Hosteler, but he doesn’t accept the terms until the chalk board with his horse-fucking confession and signature is in his hands. The scene plays out to exhaustion and ends with the board being recovered, Steve denying its authenticity, and Hosteler killing himself for never being treated like a man in any of the dealings, at least not from Steve. The shotgun to the head is so abrupt, it feels a bit unearned. The worst that the conflict seemed to warrant is a serious fight or a jailing of one, or both, of the men. Overall, this plot line felt as shaky and as fleshed out as the actors’ discussions in the hotel, which is to say not as engaging as the rest of the series.

The last bit of important combinations is with Seth and Hearst. Seth has had enough with the murders of the Cornish who are trying to unionize, yet his discussion with Al leaves him at bay on that issue. Instead, after another annoying day dealing with the drunk Steve and Hosteler — and perhaps because of his associate Hosteler’s suicide — he goes out specifically to provoke Hearst to fight or to arrest. He succeeds in the latter as he goes into the Bella Union, finds a drunken Hearst who is also nursing a loss, and gets him to threaten an officer of the law. It’s then that Bullock drags the great George Hearst to jail.

Al alludes to the couple we don’t see: the “two-headed beast” of he and Tolliver in Hearst’s employ, whether they like it or not. The idea is to have the camp weak so that Hearst can take what he desires.

Al, to the rotting Native American head he’s been keeping since season one and trying once more to figure out George Hearst’s methods: “Watching us advance on your stupid teepee, Chief, knowing you had to make your move, did you not just want first to fucking understand?”