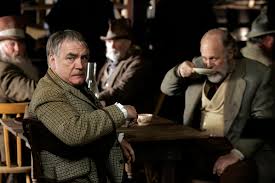 The line between amateurs and professionals are blurred in the episode titled “Amateur Night,” a wonderful entry in Deadwood where George Hearst’s hired, professional troublemakers (and likely-to-come killers) turn out to be Pinkertons. And what assholes they are. What a treat that Hearst’s hired guns turn out to be the Pinkerton Agency as they’ve been a looming threat since early in the first season and now that threat has finally come to bear deadly fruit.

Hearst instructs them to wreck havoc on the camp and to ensure the people know it’s coming from the great man himself, even telling the head Pinkerton shitheel to rough up A.W. Merrick for printing Bullock’s kind-hearted but insulting letter. One of the Pinkerton men pays dearly, though, as he riles up the wrong man: Morgan Earp. Morgan, already established as an irritating hothead in the previous episode, turns out to be a much more acceptable brand of annoying and confederate when he shoots a Pinkerton in the leg. That Pinkerton agent had insulted Morgan by calling him “Hiram,” possibly in reference to resembling a Jewish man or maybe to imply that he was some sort of hot shot, as well as needling him constantly with various other affronts. Bullock covers for them — even repeating his grab-a-man-by-the-ear trick on the head Pinkerton — and advises them that since their timber claim turned bust that they would be better to just leave camp. The Earps look to be done in Deadwood.

The Pinkertons also manage to rough up Mr. Wu, who even gets thrown to the muck, while he brings Al news that he has 150 men stationed outside of Custer City, some fifty-six miles away for Al to use in likely combat with Hearst. In the scene, Wu returns to his insult for whites by using “baak gwai lo,” as Al repeats it as well. (Also the name of a long-standing Alabama band.) It takes Johnny to help figure it all out, which costs him a punch in the face from Al for showing the boss up. Johnny sometimes can’t catch a break!

The central figure of “Amateur Night,” though, is Jack Langrishe, which is great to have Brian Cox do more than wallow in a miserable and unsatisfying storyline about a dying actor we’ve never seen ’till this season. Seeing Jack interact with more characters than before really allows Cox to use all the charm at his disposal. Jack’s a likable guy. It’s also an added dimension that he carries a knife just out of sight, revealed when served his ham as he breakfasts with George Hearst. His true charm and wit, though, is reflected in Alma Ellsworth’s twinkling eyes as he visits her bank for a loan. (Also of note that Alma returns this episode; her recovery from dope being offscreen this time as Trixie acknowledges her well being.) Jack also gets to shine in the evening with the actual trope doing more than talking. They put on the titular amateur night with various members of the camp divulging their talents; it’s of no surprise, perhaps, that Richardson can juggle! Also of no shock that E.B. would resent him for getting attention for such fun.

Everyone attends the amateur show except for a few: Al Swearengen, Seth Bullock, George Hearst, and a recently returned Commissioner Hugo Jarry. In another piece of stellar editing, Al makes the comment that he’s not at the show because “some people got to fucking work” and the next scene is a glimpse of Seth Bullock at his desk. The work that Jarry does is two-fold: first, he tries to buy back Silas Adams’ friendship and loyalty; second, he lets Hearst know that he knows of soldiers stationed nearby who could come into camp for elections in order to coerce voters to pick Hearst’s desired candidates. It’s one thing to have Pinkerton agents running around to do your bidding and another to have seasoned soldiers coming into the fray. The line between professional and amateur deepens even more.

The episode ends on a melancholy tone as Al, all alone in the Gem, cleans and sings “The Unfortunate Rake,” an old folk song. In the song a lamentable young man dies after catching an unknown disease from a beautiful woman. If only she would’ve let him know about the disease or if only he could’ve treated it before it had gotten detrimental, he would not have died young. It’s a lesson for those who should know what they’re getting into, or at least know shortly after getting involved, or a lesson for those not to be swayed by what looks good. It’s definitely a message that could’ve helped Aunt Lou’s son Odell, whom she finds out from her boss Hearst that he has died on the way to New York. It’s a sad tale made sadder still by the fact that Hearst never mentions how he died. If it was by amateur or professional hands, it matters not. Hearst was behind it and Lou’s son being dead is all that matters now.

Al to Dan on the Pinkertons being under Hearst’s thumb: “Not much of a horserace, Dan, between the appetite for blood and fidelity to political conviction.”