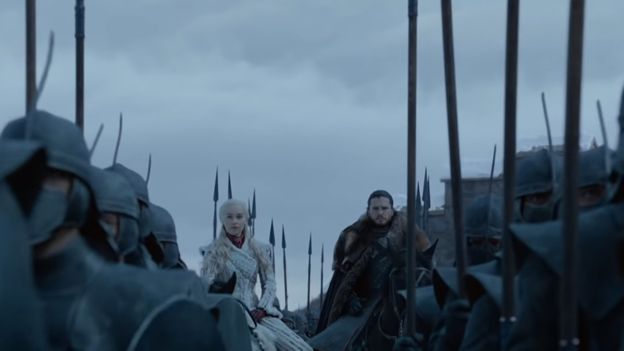 The rut of bad movies are done. Summer is almost here. Music is in the air. People are already looking for some beach reads. And some of the most watched television airs on Sundays in April the year of our Lord 2019. This weekend, April 26th through April 28th is easily the biggest weekend of pop culture for the year (so far).

While Sally Rooney’s newest piece Normal People is already on the shelves, that doesn’t mean that you can’t start reading it this weekend as an addition to your pop culture extravaganza. And if you’re anything like me, books don’t have as an immediate impact as do, say, movies and television in relation to the release dates. The novel, which centers around an on-and-off relationship between two students, isn’t as plain as it sounds. The Washington Post hails Rooney as a voice of her generation and the book has received wide acclaim for its straightforward yet moving prose. I’m in: my favorite kind of writing is simplistic yet meaningful.

The rumors are swirling that Taylor Swift is about to drop some new music this weekend and if the pastel colors from her social media accounts indicate anything, it could allude to some fun bubblegum pop music. I’m not necessarily a fan, but I thought several songs from 1989 were quite good. (Reputation? Not so much.) Needless to say, that doesn’t mean that the new one won’t be loved by millions. And who knows? Maybe she’ll sing about some ex-boyfriends. Or a current one! We’ll see.

The duo Foxygen have their release Seeing Other People coming this weekend. I really liked their 2013 song “Shuggie,” and the first song from the new album, “Livin’ a Lie,” leans heavy into pop. That’s not a bad thing, though it does feel too polished. Some rough edges would help. If the rest of the album is as similar, it would be decent at best and would work well for background music.

It doesn’t get any more large scale than what some are noting as a conclusion to twenty-two movies worth of world building in Avengers: Endgame. I’ve stopped watching trailers after the first two teasers were released for it. In honesty, I didn’t even need to see one. They have my money already. The fact that the movie clocks in at over three hours doesn’t hinder my excitement one bit. If anything, it exacerbates it. Whatever it takes.

On two smaller movie notes, Nexflix piques with two additions to their service, one of which was already a critical favorite on the big screen. Up first, though, is the rockumentary, ReMastered: Devil at the Crossroads, a recounting of the little known life and death of famous bluesman Robert Johnson. I’ve been fascinated by Johnson since hearing him some twenty years ago and his songs never sound any less haunted that previous listens. Even for those who aren’t blues scholars, most know the outlines: Robert Johnson sold his soul to Satan at the crossroads for his expertise at guitar. This film aims to go beyond that myth.

Then there’s Burning, the little seen but widely lauded South Korean movie which features The Walking Dead‘s Steven Yeun. The film’s plot is wrapped in mystery: I don’t know much more other than it’s about two friends who meet after years apart. After that, things get weird and involve a “secret hobby.” Since it’s on Netflix, it may be worth the time that you’d spend on the couch.

Killing Eve, in its second season, promises to amp up the tension between Eve and Villanelle — as well as the reveal more about the mysterious “Ghost” — as Villanelle has now returned to her partnership with Konstantin. Though this sophomore season doesn’t entice the way the first did, it’s still a great ride of a show. Seeing Jodie Comer as the crazy Russian assassin brings a smile to my face every episode. I’m glad to have Kim Bodnia back as Konstantin. His wit and charm are almost as funny as Eve’s and Villanelle’s. And having Jodie Comer play off him seems to bring an even more ridiculous dimension to the killer’s character.

Unlike Killing Eve on most levels, television’s other assassin show Barry on HBO hasn’t slumped in its second season. Instead, it’s been invigorated by the ideas it used to conclude its first: how evil is Barry? Will his conscious get to him? Who else will he ruin and/or kill? Are he and Noho Hank just friends or are they best friends? (Noho Hank is one of my favorite characters on any show!) Though I’m tired of the “Should we root for a character who is a killer” question (who cares!? It’s a fictional show!), Barry adds more depth and humor to that conversation. Only thirty minutes per episode, get caught up and watch Bill Hader’s brilliance.

Well, it’s the Battle for Winterfell, isn’t it? The apex of Sunday night. (Or maybe the nadir, depending on who your favorite character is.) This could be the biggest episode of television since the finale of M*A*S*H, and it’ll hold that title only for a few more weeks until Game of Thrones airs its own series finale. While the word “epic” is thrown around too much these days, this episode promises to be just that in the true sense of the word. The long poem is the series itself coming to a close and the hero, well, take your pick: Dany or Jon or Cersei. It will all come crashing down for many characters on April 28, 2019. In fact, the show hinted at the possibility of several deaths in the previous episode, “A Knight of the Seven Kingdoms”: Jamie Lannister, Grey Worm, Missandei, Theon Greyjoy, Podrick, (Ser) Brianne, Tormund, and Gendry. Plus, those crypts can’t be as safe as they keep saying they are.  Unless it appears in the series finale, this episode likely has the long battle scene that took an astonishing fifty-five days to film! How could anyone not want to tune in for that? Oh, that’s right. Those that are just too cool to watch anything remotely popular. Line up for your cookie elsewhere. Everyone here is watching the Battle for Winterfell.

All this, not to mention that the N.B.A. Playoffs are full swing! Can the weekend go ahead and begin?!