The writers at The Alabama Take regard the past ten years as they now dwindle away: each entry for The Decade reflects on an impressive moment, good or bad, and its effect.

It’s a cliche for a reason: the first months with a newborn baby change everything about life, never mind the repeated and true notion of disrupted sleep patterns. The biggest shift for me in August 2017, the month our daughter entered the world, came in the form of an my internal benign flippancy about the future, which stopped in its tracks and reversed into a cozy existential dread. A baby– this person, this little alien — came into my life, made me not only want to live as long as possible, maybe forever if I could, but also to protect, take care of a fragile, tiny baby and ensure a future of relative comfort and peace for her. It was staggering. Nothing about those first few months was easy except for love. It was pretty easy to love.

Our baby was born early, too, near the end of Twin Peaks: The Return, a show which argued as well as any about life’s dreadful, inescapable, unchanging, fretful past colliding with its unknowable future to form the ever-baffling present. That’s confusion. That’s fatherhood.

A plethora of excellent writing exists on the note-perfect eighth episode of Twin Peaks: The Return in the middle of the season, what with its long, surreal scenes and a narrative thread seemingly out of place amongst the rest of the entries. And equally great analysis can be found on the final episode, which is where I want to linger and lingers with me, an episode I watched while a weeks-old baby slept in the room next door and a deeper study of life began. Now two years later, and last hour of the series still haunts, haunts as terrifying as any piece of fiction before or after.

The culmination of Twin Peaks: The Return is a scream, a scream so piercing, primal, so eternal, that I would be hard pressed to find another like it in film or television. A nightmare of everything and nothing colliding at once.

Here in the final episode of The Return where the once-dead Laura Palmer, with the help of deft federal detective Agent Dale Cooper, finds that going home once more isn’t impossible, it’s the most frightening thing imaginable. Fitzgerald’s Gatsby had it wrong: you can’t repeat the past. David Lynch asserts one step beyond in that the past isn’t even real and such attempts to control it will find that you never existed. You were nothing in the first place. Try watching that on limited rest. 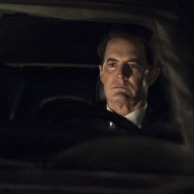 And boy does that final moment live up to the series’s entire bewildering amazement. Leading up to the final episode, Lynch has already proven what a master he is. Only one of many things is the soundscape all floating underneath the score: his use of ticks, hisses, opaque noises just off screen, the crackling of electricity, the scratching bump of a record. Each one makes you wonder if it’s in the show, in your head, or both; each singularly develops unease, hints of dysfunction; in totality, they’re the equivalent of auditory anxiety. Each of them, the notion that something isn’t right in a world where life has gloss and shine (note Dougie Jones’s bright green jacket). The sound engineering paired with Lynch’s direction? How sane do you feel?

But that fast forward to the last sequence. The instance where Laura and Cooper — or whoever they have become at the end of those strange, eighteen episodes — return to Laura’s childhood home. Laura’s mother isn’t there. (Her father has been long gone.) No one has even heard of Laura Palmer. She’s erased from existence. Then the scream. The look on Cooper’s face. The question: what year is this? The end.

Unnerving. A testament, a reminder that there is no harbor, even for ourselves, from the whatever fates await. No matter how much we strive, how much we love, the best we can do is turn ourselves over to the moment, the sequence wants to say. There’s no returning to the past or even something like it that doesn’t exist anyway. Worse than an ending is never beginning. Any attempt to fret over the past or worry about the future is futile. And it’s so hard not to do, the fretting.

It’s all classic Lynch, of course, a known practitioner of transcendental meditation. Yet that nothingness of no past and no future paired so well with those sleepless, new parental nights. Our past may have multiple, or endless, timelines, but this is the one we’re in now and it’s going forward, presumably. The baby will be a toddler, a child, a teen, an adult, an senior citizen. But that’s not now. Not yet. Now is now.

And the far future — hopefully, so distant — where none of us exist? It’s out there, too, somewhere. Or maybe it’s not.

Taking in all these possibilities could all feel hopeless, like Cooper and Laura arriving at their destination only to find that nothing ever mattered, least of all their attempts to course correct a tragic history. And no one can go any more forward than the rhythm life slowly drums, that linear journey. From the first breath, it’s one moment taken just after another moment taken just after another.

If you try, though, in those repeated, constant moments you can feel the new, vast amount of love, love that in some instances fills you with as much pain as joy, joy of birth and pain of death. And you live with those emotions, both. All that’s in-between like some dream.

The meaningless of existence where the dream becomes a nightmare in which Twin Peaks reminds us of can be defeated — or at least stifled — in the all of one moment. Then this moment. Then the next. There’s the meaning.

Each second changes so quickly, so constantly, how could everything not be occurring at once? Sleeping and awakening, birth and growth. Yet there’s the meaning.

Clinging to something, trying to get it to return, creates disaster, a primal scream waiting to happen. Laura didn’t exist because there was never one Laura, one Cooper.

So perhaps it’s best to sit in the now where that baby is still a baby. And there’s the meaning.

0 comments on “The Decade: On Twin Peaks The Return and Fatherhood”