In a scene from Apple TV+’s recent anthology series Little America titled “The Manager,” a young man, Kabir, reunites with his deported parents after years of running his father’s hotel in America, many years in which the son was merely a boy and then a teen. However, now his mother and father are back and the life at the hotel return back to normal, but before that happy ending can happen, Kabir wakes up in a sweat, worried that they have been taken from him again. It’s an anxious, heartbreaking moment, even after he quickly finds that his parents are in the next room watching television. If it wasn’t clear in the twenty-eight minutes prior, viewers understand now in the final moment of “The Manager” that Kabir likely will always live with the worry that his family may be stripped from him once again. 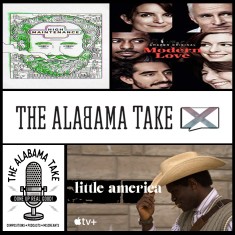 Little America is one of a few recent warmhearted anthology series to premiere or return on television, shows that are less than thirty minutes but choose to tell a slice-of-life story in a limited space.

Last October on Amazon Prime, Modern Love, a lovely piece of television, debuted to low fanfare, which was a shame. Like Little America, Amazon Prime’s anthology series runs under thirty minutes; yet Modern Love‘s focal point hones in on the warm comfort of a New Yorker’s short story of love — or sometimes, lack thereof — each based off of the successful New York Times essays of the same name. (There’s a certain joy to be had to follow up on the whereabouts of the characters after their story ends.) Each episode is based in reality, a fact that helps cultivate a specific, down-to-earth sensibility despite its big city settings. These are real people dealing with real situations about love that many of us see at some point in our lives. The show posits that love requires and builds off of a diverse set of people who vary in age range, gender, circumstance, and lifestyle and amazingly doesn’t revert to tropes of any rom-coms that could derail an in-depth look at what makes love tick (and then go boom). Besides that, Modern Love is actually a treat of a show: well written, well directed, and well cast. Tina Fey, Anne Hathaway, Christin Milioti, Julia Garner, and Andrew Scott all star in various episodes. These were so great that it was hard to pick a favorite, but if you watch the opener, “When the Doorman is Your Main Man,” and aren’t hooked, you may want to check into the hospital for lack of a heart.

Apple TV+ launched last fall, but one of its better releases has been this January with the aforementioned Little America, stories about immigrants in the United States.  With the rising and misdirected anger towards immigrants in America, this show sounds as though it would be overtly political. It’s not. At least no more than any piece of art is political, which in its case, it truly is. Created by Kumail Nanjiani, wife Emily V. Gordon, and Lee Eisenberg (The Office), the show tells true stories that originally ran in Epic Magazine. It gets a lot right while relying on similar tactics to present a full picture in a short amount of time. There are montages, flash forwards, and flashbacks. None of these do anything to hinder the heartbeat of each episode, the primary character or characters who are living a familiar life in the United States to those who’ve been here for generations. Many of the series’s episodes are melancholy and veer towards downright sad, though usually by the thirty minute mark, the issues are resolved to paint a happy enough picture. Viewers will get a particular fuzzy feeling with the pin at the end of these stories where the real-life picture of the protagonist appears and a quick, “where are they now” finalizes the show. Of note, too, is the soundtrack of Little America, presenting wonderful songs of the characters’ native tongues. Little America is truly special.

Last Friday, High Maintenance returned to HBO for its fourth season on the network, though it existed on the Internet as a web series long before. Created by the now-divorced couple Ben Sinclair and Katja Blichfeld, High Maintenance reveals so much about various New Yorkers in twelve to fifteen minute vignettes, combined for thirty-minute episodes, that sometimes have only the connecting thread of Sinclair’s unnamed pot-dealing Guy to tie them together. It’s hard to find another show that cares as deeply about the characters you don’t find anywhere else: gay, lesbian, old, trans, large, different, average. These aren’t the types of actors who headline blockbuster movies or even star in Netflix dramas. Sinclair and Blichfeld write each of their stories with such a tender hand that it is hard not to fall for every one of them despite their various (and all too realistic) flaws. It’s not a show about pot in the least, though almost every one of them ends up ingesting the drug in some fashion. Instead, this is a television series about people who face the challenges of day-to-day life. In the fourth season’s debut, “Cycles,” centered around the idea of reusing and recycling, the Guy takes in a homeless dog, a young man traverses the city barely in time to make his singing telegram visits, and a writer for This American Life discovers that her parents’ marriage story may just be her own. (Yes, Ira Glass makes an appearance.) High Maintenance doesn’t look away from any people, which is a comfort. Often it will show sex between heavy-set characters. One from last season even showed two middle-age people enjoying their sex life. Gasp!

Not all of High Maintenance‘s tales are hits: sometimes the show could use even more of the Guy, but overall, it rises above some serialized dramas that are made to hit the heart.

If you created a Venn diagram of the three series, though, what you’d have in the middle is a warmth that is just harder and harder to find in art — and certainly in the discourse of art — these days. Modern Love, Little America, and High Maintenance are a cozy bit of balm.

Few shows care this much.

0 comments on “In Praise of Warmhearted Anthologies”