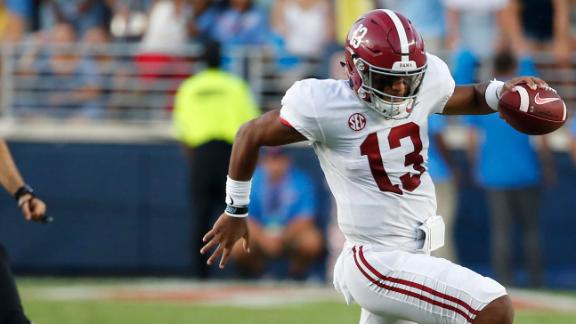 Let’s be clear: we are not experts. If you go by these picks, you’re bound to be upset or maybe you’ll be able to pay off all those student loans! You never know! Each week, two crazy, lazy writers at The Alabama Take give their best guess at the best bets with the lowest stress. It’s our college football picks of the week!

Blaine Duncan
Both of us went 2-1 last week, and in betting terms, that’s good enough: you go home with money in your pocket; however, both of us also cut it really close. I called for Purdue and Pitt to win, and only Pitt did. Purdue kept it within range to keep me in the black. I’ll take it. (I guess Scott Frost’s team is facing problems with those the extenuating injuries in his first season as Nebraska’s coach.) Here’s what I’m thinking for Week Four.

Boston College at Purdue (+6.5): In years past, when I found a team that I think is consistent and safe against the spread (a la Alabama for several seasons), I ride them until the wheels fall off. I’m feeling that way with this year’s Purdue team. Yeah, they are winless this season (0-3!), but they are bound for a victory. I think it’s coming soon. They played a tight game against a decent Missouri squad last week. I think they get a win at home against BC, their ACC Atlantic foe. This is not your grandma’s Purdue with Jeff Brohm as head coach. He’s the kind of guy the players fight for, seems like. Also, home dogs!

Northern Illinois (+10.5) at Florida State: FSU looks bad. Like, really bad. They’ll put something together, but I don’t know how soon it will be and I’ll bet it won’t be a blowout against a scrappy Northern Illinois team. I see the Seminoles winning by 7, maybe. Maybe they don’t win at all. That wouldn’t surprise me, either. I’ll say Northern Illinois gets the victory here, at least against the spread.

Arkansas at Auburn (-29.5): The Razorbacks are another team that is reeling and not putting together enough progress under a first-year head coach that their fans want to see. Auburn’s coming off a heartbreaker, but they’re getting Arkansas at home this Saturday. I’ll say that the Tigers are pissed off enough at that last-second field goal loss to LSU that they’ll put it on Arkansas big to get that bad taste out of their mouths and show the world that they’re nowhere near done. Auburn will win by forty points.

T.D. Wood
Another 2-1 weekend, even if I was way off on Boise St. and barely got by on the TCU pick. A win is a win, I suppose. A much less exciting slate of games this weekend, although there are still some intriguing lines.

Stanford (-2.5) at Oregon: Nice to see Oregon involved in a big game again, even if it still feels as if they’re a year or two away from challenging for the Pac-12 title again. Autzen will be rocking, but Bryce Love and the Cardinal should pull away late.

TCU (-3) at Texas: TCU will want to come out strong to atone for last week’s disappointing loss. Texas is riding high following their upset win over USC, but how much can we trust that result. USC may yet prove to be overrated, and the Horned Frogs are still the better team in this matchup.

Mississippi State (-9.5) at Kentucky: I must be insane. I’m taking Mississippi State, again. On the road, no less. That said, I really like this Bulldog team. The offense is humming, the defense looks solid, and they have a certain poise about them. The Wildcats are also due for a letdown following last week’s historical win.

1 comment on “Takes on College Football: Against the Spread, Week Four”