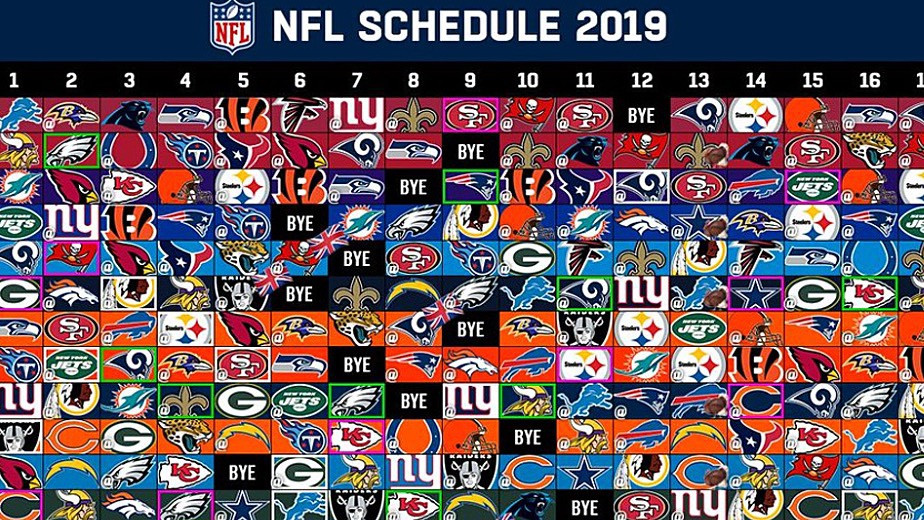 Welcome back to Takin’ on Sports! Sorry for the hiatus, but I was busy working out-of-state and getting hitched. Tends to take up a large chunk of one’s time. If you’re new here, this a weekly-ish series where we talk, um, sports — sometimes current happenings, sometimes previews, sometimes irreverent takes on random sports-related topics. All done in the name of fun and for the love of sports.

The NFL has a scheduling problem, this is known. Every season almost every team has a legit gripe about getting an unfavorable schedule, for one reason or another.

The divisions are only four teams, and that creates a ridiculous set of problems. The first being that those division winners automatically get playoff berths, and that’s how you end up with 7-9 teams in the postseason. The second problem is that with only four teams, there’s room for three of those franchises to fall off and create basically a “gimme” division for the other team, where they have six penciled-in wins before the season even starts – look no further the AFC East and New England’s dynasty. Now, I’m not saying their alignment is the reason for their success, far from it, but it certainly has played a major factor in the Patriots’ dynasty’s longevity.

The unbalanced nature of the NFL schedule is another major grievance. Each season, a team will play six division games, then they will play two other divisions, and two remaining games based on their previous season’s record. So, if you’re in the AFC North this year, you’re playing your six division games, four games against the AFC East, four games against the NFC West, and two more games. There is no logic behind this other than simple rotation, meaning if the teams in those divisions happen to be good, then you end up with a hard schedule simply because of the rotation system the schedule is based on.

Now, it’s unrealistic for the NFL to take the approach of, say, major soccer leagues where each team plays a home and away game versus every other team in the league. For example, in England, there are 20 Premier League teams; and they each play one home and one away match versus the other 19 teams, equaling a 38-game schedule that each team plays. The NFL has 32 teams, and 62-game schedule is, of course, outlandish.

But that’s not to say we couldn’t get a bit closer to balanced schedules, right?

The first step would be to realign the divisions. Let’s give some old-timers aneurysms and do away with the arbitrary AFC/NFC split, and go towards a more natural, geographical alignment, broken down into four divisions:

Four-team divisions are just silly to me, so I went with four, eight-team divisions. Like I said above, geography was a main focus, so no more ridiculous shit like Dallas being in the “east,” Indy being considered the “south,” and Miami playing in a division with teams from New England, New York and Buffalo. Now, it’s not perfect, but that’s impossible to attain when you consider the layout of cities with NFL teams. The only changes I could make would be to move Pittsburgh to the Central, Tennessee to the South, and Carolina to the East; but I feel like this alignment makes the most sense for what I’m trying to do.

Some would complain about losing some traditional division rivalries, but who cares? Dallas-Washington is not the great rivalry the NFL pretends it is; but you know what two teams (and cities, really) can’t stand each other? Dallas and New Orleans. That’s a matchup I want to see yearly. Plus, we fix the stupid situation that is two teams playing in the same stadium (Giants and Jets, and soon to be Rams and Chargers) yet being in completely different conferences.

As for the actual schedule? We’re cutting it down to 14 games – for most teams (stay with me) – played over 15 weeks. Each team still has one bye week, and will play the other seven teams in their division (home team will be rotated on a yearly basis). The other seven games will be spread out against the rest of the league, based on the results of the year before. We’ll divide the teams into three tiers based on the previous season’s records (playoff teams, middle tier and bottom tier), and each team will play at least two games against each tier, so as to try and get a competitive balance (the 7th game will come down to TV ratings or something).

Now here’s where I go completely off the rails and you start screaming at whatever device you’re reading this on going off about logistics and silly things like that. My answer to you would be the NFL is a billion dollar entity and has the resources to not only fund the research to get this crazy scenario right, but also to assist the franchises and cities involved in planning for the games, so that’s that.

After the 14 games are played, half the league – teams that finished 5th or worse in their division – will be done with their season. The top four teams in each division will play a three-week round robin, played at the opposite site of the previous matchup. For example: say the top teams in the North end up being Baltimore, New England, Philadelphia and Buffalo; and Baltimore was at home versus the Patriots and on the road against the Eagles and Bills during the regular season; they then would play the final three games at New England, and home versus Philly and Buffalo. Once those games are played, the Divisional Phase is done.

And that’s that. With this system, we get more sensible division alignments, fostering rivalries between teams in the same region, driving up fan interest in the process. We also get better matchups for the fans in the final three weeks of the season, something the NFL sorely needs. This would also help with attendance and TV ratings. Yes, 20 teams will play only 14 games, but think of the good that does for the players. Owners will hate it, and rightfully so because that’s, at minimum, four games worth of revenue they’re losing. On the flip side, this would curtail tanking and drive up competitiveness as teams vie for a spot in the postseason and the extra revenue that comes with it. Who knows, maybe there’s even a way to schedule games for the teams outside the Divisional Phase?

It isn’t a perfect solution, but it’s better than what we’ve got at the moment. The NFL fixates on adding to the quantity of games, instead of focusing on improving the quality. I feel like this system does a lot towards the latter. Got a better idea? Drop it in the comments. Until next time, Takers.

0 comments on “Takin’ on Sports: Fixing the NFL Schedule”