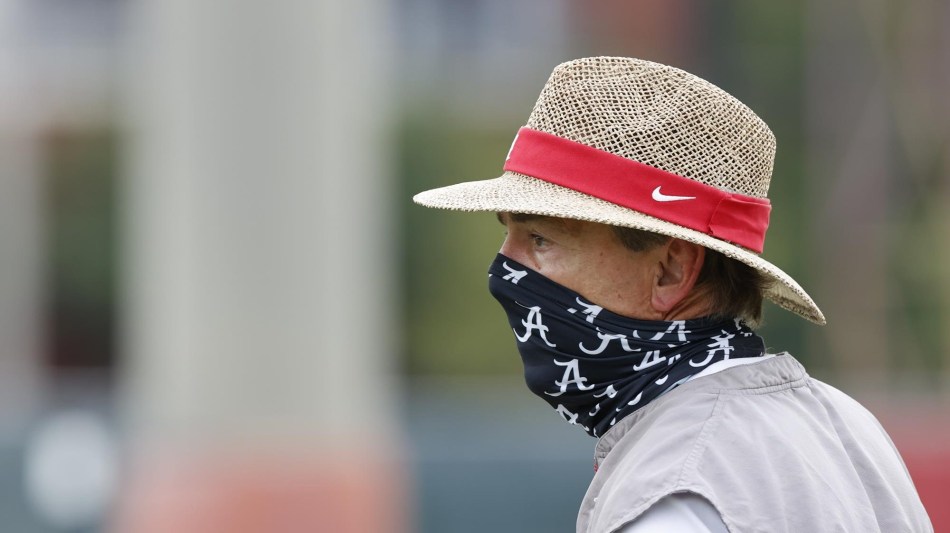 Ahoy mateys! Welcome aboard the massive pirate ship that is COLLEGE FOOTBALL 2020 where it may or may not be sinking and the majority of people on it have a debilitating disease caused by a lack of foresight and or vitamin C but we OUT HERE SALIVATING like our tongues aren’t scorbutic because COLLEGE FOOTBALL IS BACK ASTERISK ASTERISK ASTERISK. Yep! So climb aboard everyone! And make sure that you hold down the throttle as you shift the boat into neutral because we are definitely still working out the kinks and have not been able to get our pontoon on over to JAKE COKER BOAT AND MARINA (I just assume he owns a marina now why wouldn’t he)

Is this a good idea? FUCK IF I KNOW. I mean, probably not! Do I trust the NCAA to do the right thing in any situation whatsoever? Absolutely not! Do I trust Systems presidents of universities to be truthful in their testing procedures? Lmao! Do I trust 19-year-old freshmen linebackers to take the proper angle on a stretch run play? A LOT MORE THAN THOSE OTHER PEOPLE WHICH IS TELLING Y’ALL SOMETHING

Look, the last time y’all saw me I was getting yelled at for saying that the season couldn’t happen, which, like, remember JULY when all of the conferences were pretending that this lil’ thing called a global pandemic wasn’t a thing & were still selling tailgate packages for the ADVOCARE KICK OFF PEW PEW COWBOYZ Classic or whatever? I had a meltdown in the Target parking lot! Also I got messages telling me that I was the reason why college football wasn’t going to come back! Bruh! I make 42K a year! I ain’t no Finis Ferb THE FOURTH! I drive a HYUNDAI

July was NOT MY FAVORITE month. Neither was August! September has been pretty bad! Wasn’t a huge fan of April! May was kinda shitty! June was LIT THO! Just kidding! June was also bad!

I had a feeling that we’d just BARREL ON THROUGH THE ICEBERG (bringing that first sentence ship metaphor back I am a writer please preorder my book) but I also expected the hubris of hygiene theatre to cause it to be like “hell yeah, 101 thousand in Bryant-Denny, come see our new videoboards and watch as our student athletes go directly UNDER the stadium instead of slightly zig-zagging their way to the right of Gate 1 before disappearing into a tunnel” but cooler heads? Public shaming? Prevailed! & now EVERYONE gets one of those cushioned seatbacks! Really hope they give out sanitized radio headsets to everyone to really complete the “Drove In From The Yacht Club With My Red Elephant Club Polo What Do You Mean Tickets Are Virtual What Is A QR Code Speaking Of Q Did You Know That They Are Turning White Children Into Sex Slaves In The Basement Of The Insomnia Cookies’ crowd LET ME UPGRADE U

At the beginning of every season, every sane person who loves this (dumb, so dumb) sport has to reckon with the fact that it is an extremely violent game played by amateur athletes who are not getting paid and being exploited by systems of white supremacy that utilize this unpaid labor to make billions and billions of dollars. This obviously has been at the forefront of this season with UNSAFER working conditions for these student athletes! Yes, they are taking on known risks while playing football, imaginary person who likes playing devil’s advocate on the internet who haunts my dreams, but pretending that a droplet-spread virus also falls under these risks is colossally silly-willy, as if whenever you do anything that has a slight bit of danger you should be willing to accept any terrible thing that happens to you, like, I don’t know, being a woman and having a few drinks AT NIGHT means that you should ALSO accept being sexually assaulted, or, like, being Black and DOING ANYTHING

lol do you really want me to talk about actual football rather than football as this weird failed concept? GOOD BECAUSE I HAVE SOME THINGS TO SAY 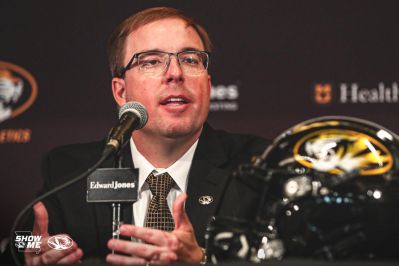 I have no qualms with Mizzou! My roommate the lovely Berry Grass was from Missouri & so we had a Shakespeare’s Pizza cup! I watched Mizzou go five-wide on the goal line for YEARS. I had a great time in Springfield, Missouri, home of the MISSOURI STATE BEARS and BOBBY PETRINO. I got very drunk off of alcoholic slushie drinks & went to a wedding! Joe Lucido is from Missouri & he’s a great person! It was his wedding that I went to! The most fun homegame in YEARS was when we finally played Missouri after they got the SEC golden ticket invite & all of these Midwestern dads came! It was also the last time I was in Nugan’s? Missouri!

That is until they hired ELI DRINKWITZ

Holy shit, this guy. Y’all. You are not prepared for how much you are going to hate this dorkus malorkus. He’s like if Gus Malzahn had an assistant coach that worshipped the ground that he walked on and followed him everywhere. OH WAIT THAT IS EXACTLY WHO HE IS

You know when you look up a member of Trump’s cabinet & you’re like “surely this person is 56 years old” & it turns out that they’re like TWENTY-EIGHT!? That’s our homie the yung Drinkwitz! He’s younger than I am! Now look, we all can’t be male models like ya boi, but MANNNN. What is in the water in Arkansas? I know it’s the Natural State but maybe it is TOO NATURAL put some chemicals in there damn

So, a thing that I am terrified about is it is a proven fact that a lack of conditioning can lead to soft tissue injuries, so I’m just dreading our first high ankle sprain due to less off-season workouts/a change in routines. For the record I will miss Mr. Yeah’s MOXIE & his annual 5K but this year was probably the best year to get rid of him & bring in a bunch of SCIENCE NERDS who have twitter accounts that read like the boring part of every Mythbusters episode

Seriously, after the fourth chopblock on LaBryan Ray’s shin you are going to HAAAAAAATE this team.

Has Mizzou finished their stadium construction yet? That south endzone looked like a Far Cry Radio Tower for like nine years. (googles it) THEY DID! Good for them!

Anyway, get psyched for them to move the ball on us a whole bunch & for everyone to get big mad at our defense & be like SAME OL TRASH ALABAMA DEFENSE & meanwhile have them score, like, 13 points. 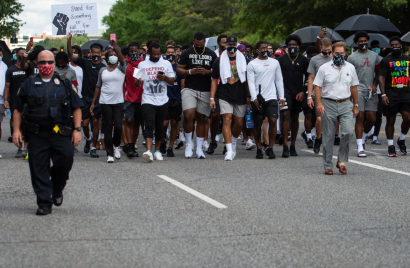 The best moment of this entire off-season was when a collection of college athletes started the “We Want To Play” hashtag in the face of their seasons being canceled by their conferences. Millions of college football fans (and administrators!) leaped on this message, including those vehemently in support of keeping the façade of the “amateur athlete” alive—THESE STUDENTS ARE GETTING AN EDUCATION! THEY GET UNLIMITED POWERADE!—before smoother than a Tua playfake, they hit em with the OKEYDOKE and effectively set out a list of demands, including an acknowledgment of police brutality, transparency when it came to their own safety, and the initial plans to create a college football players union. For the first time, maybe ever? These athletes had the upper-hand & it was awesome. Perhaps it is me being optimistic (it is, I know it is), but I believe that they still have power in these situations and they KNOW it. Of course, they also know that their power disappears if their collective seasons are thrown in the trash.

I’ve been open about the fact that I teach a lot of college athletes from all disciplines—it’s one of the great honors of my life to get to meet these students at the beginnings of their academic & athletic careers & play a small part. Whether it’s the quirky but thoughtful kid frustrated about his snaps who turns into a phenomenon, the quiet but brilliant offensive lineman who wants to talk about Call of Duty, the whip-smart and deeply caring girls on Team 24 whose seasons were cut short, the kid I had as a freshmen who struggled who comes back as a junior and helps his classmates, the kid whose name you know but whose name everyone is going to know by week 4, or the coaches son who was pre-ordained to be a leader—it’s an awesome thing to see them grow up and speak their mind; to be allowed to talk to the media, or have a glitzy documentary produced about their journey, or to carry the immense weight of narrating a video that served as a public-facing declaration of a stance against police brutality in this country.

I’ve been privy to hear them talk openly about their experiences—and one thing that I always come back to, which haunts me, even, is that there are many of them who lean all the way in; wearing their sponsored Nike gear, carrying around their backpacks with their Mal Moore bag tags, because they know the second that they are seen without these signifiers, they know that they will be treated like just another person. And for a lot of them, being treated like just another person means being seen as a threat solely because of the color of their skin.

In situations where I find myself toiling over my enjoyment of mega-complex corporate entities I tell myself to “follow the labor”—this is obviously an over-simplifying of the boss/worker relationship, but it’s something that keeps me afloat. It helps me to follow and listen to the people putting the work in; especially those that WANT to put the work in, even if they know that the system that they are working for is never going to give them a fair shake. It keeps me from falling into despair that our country is going to continue its long march into fascism; it allows me to eat a hot dog on the 4th of July, or to sing the Star-Spangled Banner loudly while kneeling because fuck you this is my song too, dammit.

But maybe, in actuality, I am choosing to follow the illusion—that for three hours in Saturdays in the Fall, we are all safe.

I hope that the games this weekend bring you some joy. Fuck normalcy. Normalcy is what got us here. Joy is what’s gonna get us through. That and some goddamn work. Roll Tide, comrades.

4 comments on “OLIU’S OUTLOOK: I GUESS WE ARE DOING THE THING”