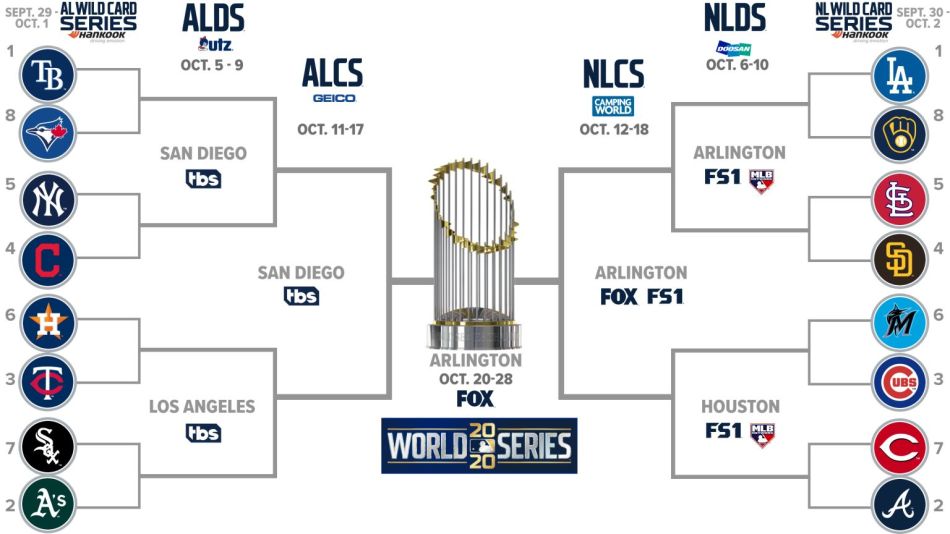 The Major League Baseball playoffs start Tuesday, September 29th, and they are unlike anything we’ve seen before.

MLB is notoriously the most stubborn, sluggish American sports league when it comes to adapting and evolving to fit modern American culture. It wasn’t even until 1995 that they extended their postseason beyond 4 teams, and even then it was met with backlash from the sport’s famously grumpy “tradition over everything” sect. They expanded again in 2012 to a 10-team structure that just about everybody hates, continuing the long, proud MLB tradition of not wanting to appeal to their dwindling fanbase (see also: using the friggin’ All-Star Game to determine who gets home field advantage in the World Series; or just about everything Bud Selig did while in office).

After the ‘rona disrupted our lives and our sports, MLB had the toughest time of any professional league figuring out exactly how they’d play their 2020 season, and didn’t really finalize postseason details until a couple of weeks ago. So, what we’re getting is a 16-team behemoth, with differing series lengths and neutral sites and a whole lot of possibility.

As said, it’s a 16-team playoff, with an 8-team bracket for each league. The three division winners in each league get seeded 1-3 based on record. Then the second place finisher in each division gets seeded 4-6 based on record, and the two teams with the best records fill up seeds 7 and 8. Matchups are the 1-8, 2-7, etc. The first round, or Wild Card Round, series will be 3-game series played entirely at the stadium of the higher seed. The Division Series will be moved to neutral sites — the NL will play in Houston and Arlington, Texas; the AL will play in Los Angeles and San Diego, and those series will be of the 5-game sort. The League Championship Series will be played in Arlington and San Diego, and the World Series will take place in Arlington, and both of those will be traditional 7-game affairs.

LOL, fuck if I know. I didn’t get to watch much of the season beyond some Braves games, so you tell me.

What I can say is it’s a safe bet the Dodgers will be a major players. They’ve thrown a buttload of money into their roster over the past decade in hopes of winning their first WS title since 1988, and this year is as good of a chance as they’ve had. The Braves, their biggest challengers in the NL, certainly have the bats to matchup with the Dodgers — including first baseman Freddie Freeman, who should absolutely win MVP and it will be a goddamned crime if he doesn’t — but, oh boy, is the Braves arsenal of young arms a MASH unit at the moment. The Cubs are the next biggest threat, but their lineup has been suspect and their bullpen is a mess; however, the rotation is good enough to carry the team deep into October.

Over in the AL… umm, you got me. Tampa Bay is the top seed, but I know nothing about them other than they play in the worst stadium in baseball, which doesn’t matter at all. The A’s won’t have to leave the state of California until the WS, so there’s that. The Yankees spent their usual Titanic-sized boatload of money, but injuries slowed them down and put them in the 5-seed.

The Astros are here if you’re looking for a team to root against, and they could’ve devised some new way of cheating, so that’s something to watch out for.

Yup, my oldest sports love, actually. Some of my earliest memories are my parents taking me to old Fulton County Stadium to see the awful Braves teams of the late 80s, and then hiding in the car during the postgame fireworks because apparently little TD did not like the loud noises (teenager TD subconsciously over-compensated for this by standing next to the speakers at all of those angry white boy nu-metal concerts he for some unexplained reason loved back then). After moving to Baltimore, I was able to keep up with the Bravos thanks to the wonderful world of Ted Turner’s TBS, which played damn near every Braves game back in the day. That, coupled with the lack of interleague play until I was 12, allowed me to still claim the Braves while also supporting the hometown Orioles. Eventually, the Angelos ownership became too much and I dropped my support for the O’s in favor of throwing all of my devotion to my beloved Braves — I should note here I always cheered for the Braves when they came to Baltimore for interleague play, I’m not one of those “oh as long as one of them wins I’ll be happy” assholes (looking at you, every New Yorker who supports both the Yanks and Mets — y’all are the absolute worst).

Anyway, yes I am a proud fan of the team most likely to be pressured into changing their name within the next few years. Which I’m all for, by the way, just keep the colors and the “A” logo and switch it to something Atlanta-specific… as long as it has nothing to do with peaches, for fuck’s sake.

All I really want from this postseason is a series win. The Braves haven’t won a playoff series since 2001, when they swept the Astros in the NLDS before losing to eventual WS champ Arizona in the NLCS. But they have a dynamic young core, and might be the most exciting team to watch when they’re firing on all cylinders. The offense average the most runs-per-game in franchise history since the 1800s, and when healthy the young arms are studs. The bullpen is great, too, and that’s always huge in the postseason.

But, they are a team from Atlanta, and that’s scary. Atlanta sports teams aren’t exactly stricken with good fortune. I already mentioned the Braves postseason drought, and you probably already know about the Falcons’ recent history. The Hawks haven’t been shit since Dominque Wilkins left town, and their move to mortgage the family farm for Trae Young doesn’t appear to be working out in their favor. The Thrashers existence was short and unmemorable. Even Atlanta United, who actually won the MLS in 2018, have fallen off and aren’t playing the spectacular soccer that saw them win the title. For whatever reason, Atlanta sports fans aren’t allowed to have nice things.

All signs point to MLB altering their postseason format yet again before the 2021 season, and there are even rumors that they’ll keep this 16-team monster. I fucking hope not. There is absolutely no world in which MLB needs a postseason that big. I would love a return to the 8-team format used between 1995-2011, but that’s unlikely. We’ll probably get some kind’ve 12-team format that gives the top team in each league a bye.

In my dream world where sport league actually make radical changes, MLB would make a massive realignment to their league structure and do away with the non-sensical AL/NL split and go for more geographically-oriented leagues/divisions. It makes zero fucking sense to me to not have teams who play in the same city/region in the same division/league. I mean, seriously, look at collegiate athletics or soccer anywhere in the world and you’ll see how local rivalries do a mountain of good for the game. And yes, you know damn well I’ve already played around with the realignment. Just off the top of my head, the divisions could be:

There, much more interesting than the current setup. But that’s another post for a different time.

0 comments on “Takin’ on Sports: The Wildest Postseason in MLB History is Here”