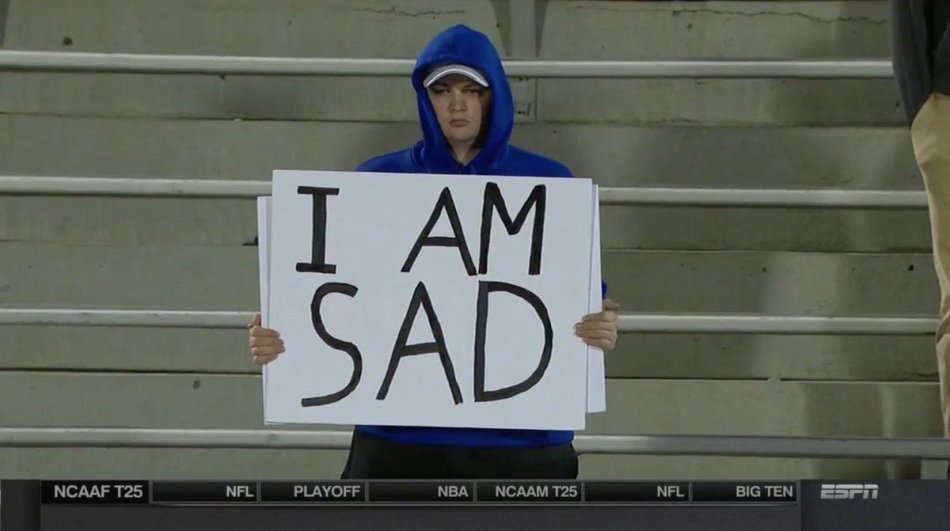 There is no logical reason someone would be a sports fan. It doesn’t matter that you grew up in a specific town or went to a certain school. Those are justifications, not logical rationale. No sane, able-minded person would volunteer a part of their emotional well-being to a group of strangers playing a game in which said person has absolutely zero effect on the outcome.

Yet, we do it. We have for over a century now, since our grandfathers doomed our fathers, and in turn they have doomed us to this cruel, torturous life full of pain, heartbreak, sorrow, frustration, anger, and every now and then, satisfaction and bliss. And we will doom our children, our brothers and sisters, our friends and lovers. It’s a vicious cycle we are all too willing to enable.

Are the highs worth it? Do they really wash away the wounds caused by the lows? Is winning just a drug that masks the reality of fandom? Does it even matter? If we’re aware enough to as these questions, shouldn’t we have the presence of mind to quit engaging in the self-mutilation?

Perhaps we don’t care. Perhaps that’s the drug’s effect: apathy towards misery, in the pursuit of the almighty win.

One has to wonder about the distant future and how they will view sports of this day and age. Will they still exist, in some advanced, evolved form? Will they go extinct, leaving us to look like vicious neanderthals from days long gone? What will they say about fans? The millions who spent hard earned money on tickets and merchandise, who poured their hearts into a business that didn’t pay them.

Fools, that’s what they’ll say. “Look at these fools,” they’ll laugh, “they gathered in stadiums by the thousands, and in front of their televisions by the millions, to cheer on absolute strangers. They ended friendships and relationships based on the results of games in which they didn’t participate. They invested money into a business, yet never expected to receive a share of the profits — none other than the pride of saying ‘their’ team was the best. Damn fools!”

They’ll be right, of course, and you are indeed a damn fool if you think otherwise. You have to see the idiocy in being a sports fan, it’s the only way to keep your sanity. The only way to move past the devastating losses, and get on with your life.

Of course, the insane don’t know that they are insane. Some would argue it’s sane to acknowledge your insanity. That’s a debate that will probably never end, so it’s probably foolish to ponder the answer.

The answer doesn’t even matter, does it? We come back all the same. We enter into abusive relationships with teams, be they franchises or clubs or schools, knowing full well the hits we’re about to take, and we do it with glee. We endure every ounce of punishment, with pride to boot.

We watch as our team gets within one win of the World Series, what would be their first in 21 years. We then watch as they lose three straight games, and blow that chance into oblivion. We then cuss and damn what twisted deity hath brought this hellish curse upon us.

Then we accept our fate. We search for the reasoning, be it right or wrong, to soften our hurt. We then discuss what could change, and just like that hope springs eternal.

0 comments on “Takin’ on Sports: To be a fan is to court misery”